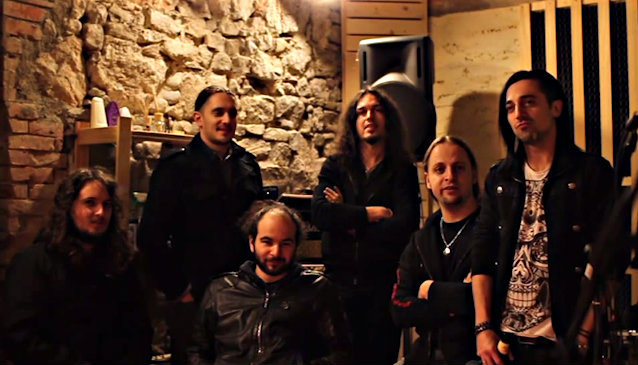 Italian metallers ELVENKING entered Domination Studios in San Marino on December 16 to begin recording the follow-up to 2012's "Era" for a late spring release. Symohn is tracking the drums this week, laying down the foundations of what the band already considers "the ultimate ELVENKING manifesto." Artist Gyula Havancsak, who previously worked with ELVENKING on the covers for "The Winter Wake", "The Scythe" and "Two Tragedy Poets" is already creating new a masterpiece of art.

Comments ELVENKING singer Davide "Damna" Moras: "It is always very easy to talk about 'the last album.' To say how cool it is, how the band has improved and created better music, better lyrics and so on.

"This new ELVENKING album is something completely different, though. We are not talking about a simple new album with a bunch of new songs. We are talking about something bigger. It is a piece of life... of our life, but also our fans' life. It is the ELVEN dream come true. It is our ultimate manifesto where music, lyrics and spirit unite. It's not just about music... there's a whole concept behind this album... It's like when stars align, you know? And this time we are ready! But we'll talk about it more specifically very soon."

Adds guitarist Aydan: "I consider this album to be the closest to the original conceptual idea of the band.

"When we founded ELVENKING, our idea was to mix up strong epic and intense music with influences from folklore and with lyrics based on our personal idea of life and what we consider as a personal sort of paganism. Through the years, we moved steps away from our original path in search of new stimuli and way to express ourselves as songwriters, but now we want to carve the word ELVENKING in our music and idea where the origins of our band are."

The third video clip from the studio can be seen below.