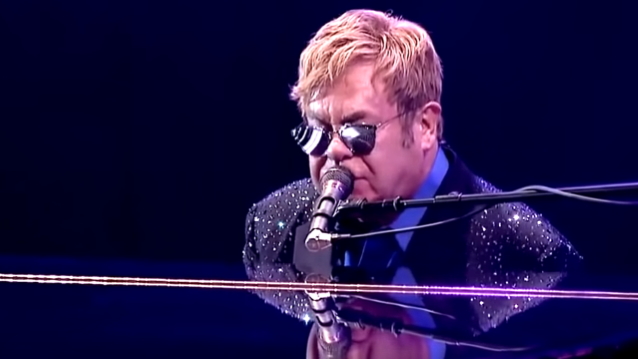 During the latest episode of Elton John's Apple Music 1 show "Rocket Hour", the legendary singer told guest SG Lewis that he recorded "something" with METALLICA.

"I've just done something with METALLICA," he revealed. "During this lockdown period, I've been working with [the virtual band] GORILLAZ and people like that. I haven't been doing any Elton stuff, but I've been doing great stuff with other people."

It is not clear what project with METALLICA Elton was referring to, but earlier this year, Miley Cyrus said that her upcoming METALLICA covers album will feature John playing the piano on her version of "Nothing Else Matters".

In a January 2021 interview with U.K. radio station Capital FM, Cyrus said: "I did a METALLICA cover of 'Nothing Else Matters' featuring Elton John on piano, I've got Yo-Yo Ma, Chad Smith; so many all-stars in this band. I'm so excited about this collaboration."

Cyrus continued: "I mean, having Elton John and METALLICA and me ... I love when ingredients don't quite fit. Or it seems like a concoction that no one would ever put together, and you gotta have someone like [the song's producer Andrew] Watt that will take that risk."

In September 2019, around the time when METALLICA played two concerts concerts with the San Francisco Symphony at the city's Chase Center, drummer Lars Ulrich posted a picture of him, his wife and John on Instagram, writing: "Beyond inspiring to spend an evening in the company of one of the greatest songwriters and entertainers ever... thank you Elton for your generosity and embracing vibes!"

Last year, John made a guest appearance on on Ozzy Osbourne's "Ordinary Man" album, playing piano and singing on the title track.

Earlier this month, METALLICA celebrated the 35th anniversary of its classic third album, "Master Of Puppets", by performing the song "Battery" on an episode of "The Late Show With Stephen Colbert".

In January, Ulrich told Classic Rock that METALLICA was making "glacial" progress on the follow-up to 2016's "Hardwired… To Self-Destruct" album. Two months earlier, Ulrich said in an interview with Rolling Stone that METALLICA was nearly a month into "some pretty serious writing" sessions for its next studio album. That same month, Lars told Kara Swisher at the CNBC Evolve Summit that he and his METALLICA bandmates have been working on new music for "the last six [to] eight weeks virtually." But he admitted that they have encountered a myriad of technical issues which have slowed their progress.