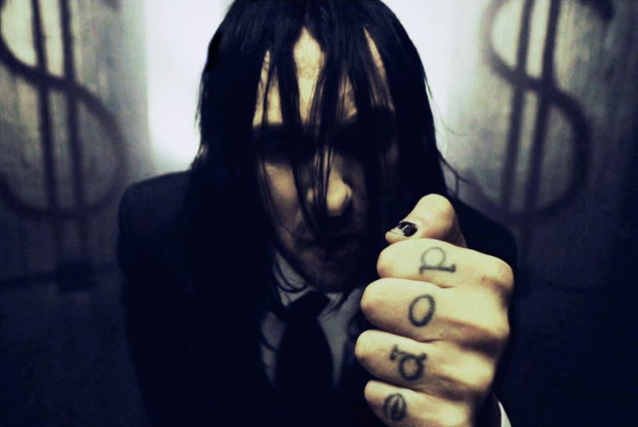 DOPE leader Edsel Dope, who is widely believed to be Xer0, the masked frontman of STATIC-X, has fired back at ex-STATIC-X guitarist Tripp Eisen over accusations that Tripp's former bandmates took undeserved songwriting credit on some of the tracks on the group's just-released "Project Regeneration Vol. 1" album.

During the recording sessions for "Project Regeneration", STATIC-X claimed in a press release that one of its producers uncovered several additional unreleased and unfinished tracks, many of which contained isolated vocal performances by Wayne Static. Because of this supposed find, the new STATIC-X album now features lead vocals by Wayne on virtually every song.

On Monday (July 13), Eisen — whose real name is Tod Rex Salvador — released a statement disputing STATIC-X's explanation for where some of the previously unreleased tracks came from and claiming that the original versions of all of the older songs on "Project Regeneration Vol. 1" are "completely Wayne Static and Tripp Eisen material; none of the current members had anything to do with their creation." Tripp also took credit for getting Edsel involved with STATIC-X's comeback after Eisen and Campos supposedly "reconnected and re-established their friendship" in late 2016.

Eisen, who served time more than a decade ago for meeting and sexually assaulting two underage females in January and February 2005, went on to say that his "past legal troubles were addressed early on and Tony Campos had Tripp's back, knowing the details of his case, the exaggerations in the press and judged his friend fairly and without prejudice." Tripp also claimed that "Edsel shared Tony's sentiments about Tripp and knew his good character."

"Fuck You!!!! You 2 time CONVICTED sex offender piece of shit! Keep my name out of your talentless mouth! I fired you 20 years ago, because you are an egotistical, low talent idiot and STATIC X fired you more than 15 years ago because you were a 40 Year old creep, who was arrested for having sexual relations with multiple 14 year old fan girls. DEPLORABLE!

"You have not progressed in the least bit. Not even after spending 2 separate stints in jail. You are an antagonist, who paints himself as a victim. BOO HOO & FUCK YOU! Meanwhile, You've never even apologized to our metal community for betraying all of our trust, by preying on young, impressionable fan girls for your own selfish perversions. And now, you are trying to attach your name to an incredibly well orchestrated memorial / tribute that you had ABSOLUTLY NOTHING to do with.

"GET THE FUCK OUTTA HERE!!!

"For your information. Wayne and I had a very pointed discussion about you, while on tour together in 2014, so I know EXACTLY how he felt about you. WAYNE FUCKING HATED YOU & he had no interest in ever associating with you again…

"You've been begging for people to pay attention to you and your new band for 3 years.. Attempting to tie yourself to virtually everything STATIC-X or DOPE does. Hash-tagging DOPE, STATIC-X, and the MURDERDOLLS in virtually every post.. After all of that, you have managed to gather roughly 1,000 followers in TOTAL… LOLOLOLOLOLOL..

"IT'S OVER dummy. You will always be known as that 40 year old creepy guy with 'LEE PRESS ON' dreads, who targeted underage fan girls for sex.

"This is not my opinion.. This is a fact and it is public record. Charges were filed against you in 2 separate states for kidnapping, endangering the welfare of a child, aggravated sexual assault, and luring to entice a minor through the Internet. You were ARRESTED & SENTENCED.. GAME OVER.

"I hope that ICP and all the Jugalos across the world are reading this and remember who you are, what you did, and why you've ended up crying on the sidelines.

"I'M SO DOWN WITH THE CLOWNS and I so hope the Jugalos are listening.

Keep my name out of your talentless mouth!