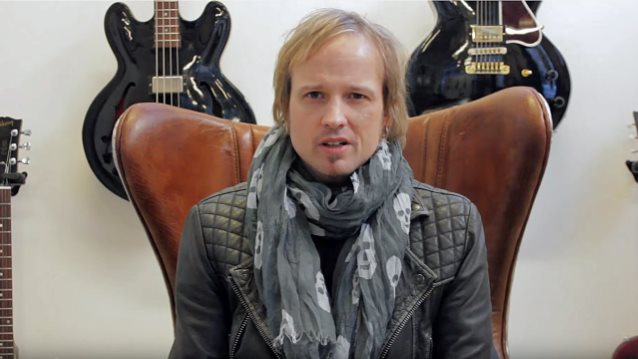 Sammet, who has previously recorded and toured with Hansen and Kiske in AVANTASIA, told Jovan Ristić of Serbia's Nocturne magazine about HELLOWEEN's renewed collaboration with the two players: "When [Kiske] signed with HELLOWEEN's management back in 2008, I knew it was just a matter of time. Then [Michael] and Kai got along very well on [AVANTASIA's] 'Metal Opera' tour, so Kai joined UNISONIC afterward. Their drummer manages HELLOWEEN. It's an incestuous business. [Laughs] The whole thing was overdue and planned."

He continued: "Yes, I was a bit sad as I knew it would mean that Michael is not allowed to play with AVANTASIA anymore, but I have waited for this moment as much as everyone else. It's the best thing that could have happened to all of them. I wish them nothing but the best for the future."

Back in 2013, Sammet recalled his impression of Michael's vocal abilities when he first heard HELLOWEEN's music more than twenty-five years ago. He said: "I never saw [Kiske] with HELLOWEEN. I saw HELLOWEEN without [Kiske] and I saw [Kiske] without HELLOWEEN and I saw bands without [Kiske] and without HELLOWEEN. All combinations. [Laughs] But I was too young to see [Michael] with HELLOWEEN. By the time I got into HELLOWEEN, I was twelve and three years later, Michael had, ahm, 'left' HELLOWEEN. But I remember that when I first heard 'Eagle Fly Free', I wanted to become a singer myself, because I thought that this guy was amazing. He had the technique of Geoff Tate and the raspiness of Bruce Dickinson. The funny thing is that I got to know [IRON] MAIDEN and QUEENSRŸCHE only after I got into HELLOWEEN, so I thought those two singers were stealing from Michael Kiske. [Laughs] Honestly, Michael changed my point of view on music. It was so powerful and so uplifting at the same time. It was like Beethoven's 'Hymn To Joy'. It was positive music with a lot of energy and I never thought something like that existed. I was used to 'Rock And Roll All Nite' of KISS to AC/DC, which was powerful but angry. HELLOWEEN was not angry. It was powerful and positive."