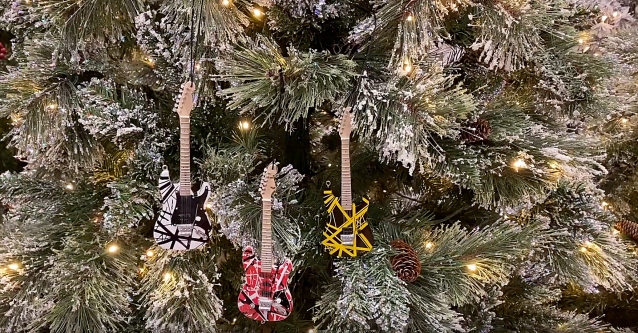 The Van Halen Store is offering rockin' little guitars for your holiday tree.

These limited-edition six-inch replicas of Eddie Van Halen's iconic guitars are handcrafted from solid wood. Guaranteed to brighten your holiday. Available individually or in sets.

There have been a lot of rumors regarding the VAN HALEN guitarist's supposedly worsening health, with TMZ reporting recently that Van Halen has been traveling between the U.S. and Germany for cancer treatment going on several years now. The site later said that "the sad medical news had some folks thinking Eddie was on his death bed ... but we're told that's anything but the case."

Last month, Eddie stopped by a McLaren dealership in Beverly Hills and mingled with the sales team, taking pictures and even giving one fan a kiss. A few days later, he was photographed at a spinal neurosurgeon's office in Beverly Hills.