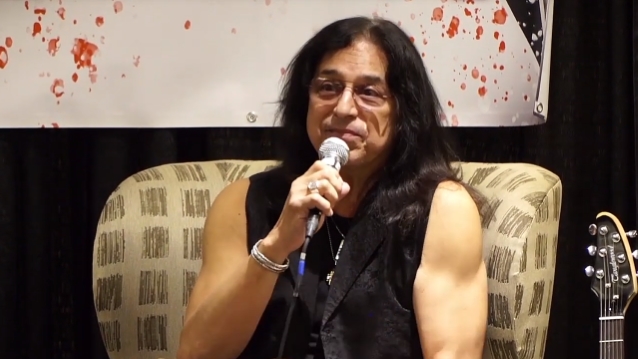 "Epic Ink" star Josh Bodwell conducted an interview with TWISTED SISTER guitarist Eddie Ojeda at this year's Headbangers Con, which was held November 10-11 in Portland, Oregon. You can watch the entire chat below. A few excerpts follow (transcribed by BLABBERMOUTH.NET).

Eddie: "There definitely was a struggle. I mean, once we got Dee [Snider, vocals] in the band, we didn't have to worry about singing. At the time, he really did [LED ZEPPELIN vocalist] Robert Plant very well. We did all ZEPPELIN. 'Zeppelin I', we did the whole album. We were kind of a ZEPPELIN band, which was weird for a little while. Then, people always love 'Zeppelin I'. Gradually, I said, my whole thing, let's just play four, five nights a week so we can work toward doing originals and get signed. Everybody had the same mindset. Playing the bars and stuff was a way to pay the bills until we got signed. Eventually, it was ten years before we got signed, but it was definitely difficult. What overnight successes take ten years? That's pretty average. I've talked to so many people. Even QUEEN, you think QUEEN would never have a hard time, but they had a hard time too in the beginning."

Eddie: "It got to a point where people were coming down and say they were going to sign the band and it never happen. We got the point where we just said, 'He's lying.' But, we just kept chugging away. We actually got signed in England. Phil Carson, he signed AC/DC, ABBA, FOREIGNER, YES, a few successful bands. He toured with LED ZEPPELIN. So, it was one of those things that Atlantic Records had turned us down in the States, but he was the president of Atlantic Records in England, so he called America and said, 'I'm signing this band.' Our first deal was with an English company called Secret Records. That was a good name for the record company because they were a big secret. Secret Records, they were a secret. Then that led to us playing a huge show in England and ten million people watched the show. Lemmy [Kilmister] from MOTÖRHEAD, Lemmy took us in right away. We opened for MOTÖRHEAD and we were terrified because their fans are hardcore. We wore makeup at the time. Then Lemmy came out and introduced us. It really helped."

On TWISTED SISTER songs such as "We're Not Gonna Take It" and "I Wanna Rock" becoming rock anthems:

Eddie: "When we did 'Stay Hungry', I knew there was something going on. 'You Can't Stop Rock 'N' Roll' and 'Under The Blade', they did okay, but 'Stay Hungry' was the album that really went big. The anthems in there like 'I Wanna Rock' and 'We're Not Gonna Take It'. 'We're Not Gonna Take It' has paid a lot of bills, so I don't complain. If you're at a ballgame, all of the sudden it comes on. You're sitting at a ballgame and the guy next to me is rocking out to the song and I'm, like, 'Okay, I'm not going to say anything.' It's pretty awesome while watching the [New York] Mets and the stadium and all of the sudden, one of your songs comes on, it's a pretty great feeling. It's funny because I always said when they start playing the song in a parade, then you know you got a hit song. Sure enough, in the Thanksgiving parade, they had somebody doing 'We're Not Gonna Take It'. The bad thing was, this was about two years ago, all these people with walkers, they did this whole dance thing. I'll take that. [Laughs] I've also seen it in movies or seen college bands. We've put it on our web site a few times. A lot of colleges use it. It's become one of those songs that teams use. I knew it was a single because the way it had a whole anthem thing to it. Yeah, you never know what's going to happen with something, like that's going to be the one that does it for you. Luckily, it did."

On what he can attribute TWISTED SISTER's longevity to:

Eddie: "The song says: 'The Fire Still Burns'. There's still something there. We stopped touring in 2016, but for 14 years, we had a really good comeback and we were headlining all these huge festivals in Europe. It's been great. It was nice to come back like that. It's a whole new generation. Headlining these festivals was a good reason to get back together. Actually, what happened was after 9/11, we did a benefit with [KISS guitarist] Ace Frehley. It's funny because OVERKILL and ANTHRAX were on the bill, too. We headlined the show, but ANTHRAX and OVERKILL, it was a 9/11 thing for the policemen and firemen, a benefit we did. It was a great success. That sort of started the whole thing going."

On whether "having fun" was one of the reasons for TWISTED SISTER's 2001 reunion:

Eddie: "That, and everybody was broke. That will get a band together real quick… It was great [going back on the road], especially headlining. In the '80s, we didn't headline. We were like third or fourth on the bill. Back then, it was IRON MAIDEN, or WHITESNAKE was headlining. But we got closer and closer to the headlining thing. Then we broke up for ten years. The lack of funds put us back together, to be honest. [Laughs]"

On whether he's working on any post-TWISTED SISTER musical projects:

Eddie: "I have some tracks. I want to do a second solo album, but I'm kind of waiting. I'm moving to Nashville and I'll hook up with some people there. It's great — you walk around with a guitar in Nashville and people are cool about it. There's guitars everywhere. You go to the airport and you see a Les Paul hanging [on the wall]. It's a great place. A lot of people are going there. It's a lot easier to get together in a place like Nashville. In New York, people just don't do that, not as much."

TWISTED SISTER retired from the road two years ago after completing a farewell 40th-anniversary tour. The band's last-ever concert took place in November 2016 — 20 months after the passing of TWISTED's longtime drummer A.J. Pero.

Snider recently said that he had no regrets about putting the group to rest, explaining that he wanted to "step away gracefully" before it was too late.