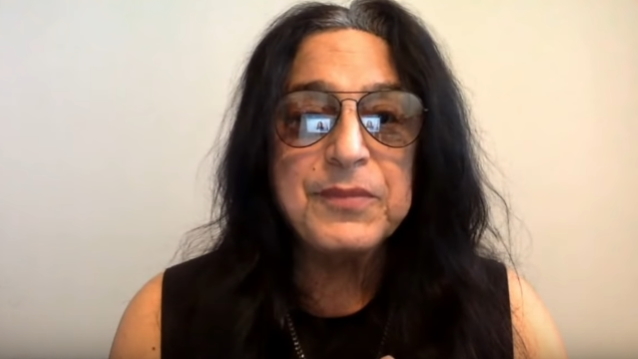 During a recent appearance on "Waste Some Time With Jason Green", TWISTED SISTER guitarist Eddie Ojeda was asked how it came about that singer Dee Snider was credited with writing all the music and lyrics in the band and no one else seemingly contributed to the process. Eddie responded (as transcribed by BLABBERMOUTH.NET): "[Dee] wrote the melody. He would sing the thing to me, and I would work it out with him. He would kind of have a rough version of the chorus. He could play guitar a little bit — a little bit to show the direction — and then I would kind of refine it. I think I worked well with Dee; he could vocally commicuate something to me, and I could bring it out.

"All my guitar solos — I mean, I wrote a lot of theme solos. And those are my solos that I wrote; Dee didn't write those guitar solos. Like on 'Burn In Hell', the whole beginning to 'The Price'. Dee's even admitted it. I mean, he has said, with 'The Price'… At one point, he wanted to give me half of the publishing, but it just never worked out. I didn't put up a stink about it. [My attitude was], 'Okay, we're doing this.' I did my best, came up with parts and never got any writing credit for it.

"Every band is different," he continued. "Like, Eddie Van Halen used to write 90 percent of the songs [in VAN HALEN], but he shared everything 25 percent with everybody in the band. Some bands just do that; some bands don't. And Dee was very diabolical, in his own words, as far as putting 'All words and music by Dee Snider' on every album, which I didn't think was necessary, because it just wasn't true. Yeah, he did write all the lyrics and he did come up with the melody. And at the time, he said, 'Well, the guy who writes the melody is the songwriter.' I did talk to him about, 'Well, what about all the stuff I came up with?' … There's a lot of things I came up with that I never got writing credit for… Just a lot of these little guitar bits that I came up, and a lot of the theme solos, which are melodies; they're not just some guy playing Chuck Berry riffs. They're, like, singable solos with their own melody…

"Dee knew how to kind of roughly put out a chord," Eddie added. "He was good at singing it to me, so I could translate it into whatever it needed to be.

"I think nobody cared. [We didn't make] a big stink about it, because we all said, 'You know what? We're going to do well, so it doesn't matter.' At the time, you don't realize how important it is to fight for that. You don't wanna cause bad vibes. It's one of those things [where] you just go with the flow."

In 2015, Snider sold his Snidest Music music publishing catalog of 69 songs — including the classic TWISTED SISTER rock anthems "We're Not Gonna Take It" and "I Wanna Rock" — to Universal Music Publishing Group (UMPG) for what he later said was "a lot of money."

TWISTED SISTER rose to prominence from the New York club scene in the early 1980s. Their biggest album, 1984's "Stay Hungry", contained "We're Not Gonna Take It" and "I Wanna Rock".

In 2016, TWISTED SISTER embarked on one final trek, titled "Forty And Fuck It", in celebration of its 40th anniversary. These shows featured the band's "core lineup" of Snider, guitarists Jay Jay French and Ojeda, and bassist Mark Mendoza, along with drummer Mike Portnoy. The band's last-ever concert took place in November of that year — 20 months after the passing of drummer A.J. Pero.

TWISTED SISTER's original run ended in the late '80s. After more than a decade, the band publicly reunited in November 2001 to top the bill of New York Steel, a hard-rock benefit concert to raise money for the New York Police And Fire Widows' And Children's Benefit Fund.