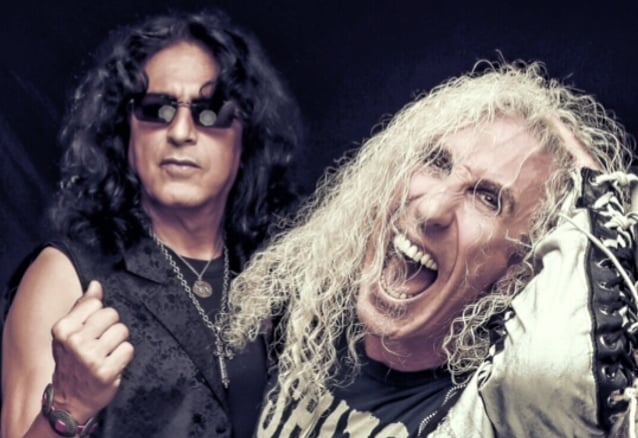 TWISTED SISTER guitarist Eddie Ojeda has revealed that he is in the process of recording a tribute to MOUNTAIN's Leslie West, who died three months ago at the age of 75. The iconic guitarist, vocalist, songwriter and storyteller suffered cardiac arrest at his home near Daytona, Florida on December 21, 2020 and was rushed to a hospital, where he never regained consciousness.

Speaking earlier this month during Headbangers Con's 2021 "March Mayhem" virtual event, Eddie said (as transcribed by BLABBERMOUTH.NET): "I've been doing some recording. I wanna do a tribute to Leslie West, who was a friend of ours and passed away. He was one of the older guys that I grew up with, so when I got to be friends with him, it was pretty cool. So right now, I got the tracks. We're working on doing [a cover of MOUNTAIN's] 'Theme From An Imaginary Western'. So, Mike Portnoy's playing drums, Rudy Sarzo is playing bass. And I think Dee's [Snider, TWISTED SISTER] gonna sing the lead, and I'm gonna play guitar."

In early January, Snider took to his Instagram to share an eight-minute video in which he called West "one of the greatest guitarists of all time." He went on to say: "Leslie West was the first guitarist — when he played a solo, I stood up and paid attention and listened. And I think, as over the years I sort of examined what it was about Leslie that spoke to me so much, it was because he played melodies on a guitar solo. He made that guitar sing, and his leads — most of you know him from 'Mississippi Queen' — but his guitar solos, every one was singable. You could hum it, sing it, repeat it. It had melody to it. It was a song in and of itself.

"Leslie became one of my heroes," Snider added. "As the years went by, I got to meet Leslie, know Leslie, become friends with Leslie, and he did not disappoint."

West, who was born Weinstein in New York City, first emerged in the scene as a member of THE VAGRANTS. A few years later, he and Felix Pappalardi formed MOUNTAIN, a band that was amongst the first to pioneer the genre later to become known as heavy metal. Hits that include "Mississippi Queen", "Theme From An Imaginary Western" and others established an indelible voice and guitar tone that remains legendary to this day. In 1969, West brought his presence to the stage at Woodstock.

As the decade turned, he formed WEST, BRUCE AND LAING with his bandmate from MOUNTAIN drummer Corky Laing and CREAM's Jack Bruce. In, 1971, West contributed to THE WHO's "Who's Next" sessions in the city, performances which can be heard on the 1995 and 2003 reissues of that cornerstone album.

Alongside his significant contribution to pop culture as the face of MOUNTAIN, West appeared in films that include "Family Honor" (1973) and "The Money Pit" (1986). He was a regular guest on "The Howard Stern Show", and over the course of decades remained a periodic visitor alongside enjoying a decades-long friendship with the talk show host.

West was inducted in to the Long Island Music Hall Of Fame in 2006, and appeared on dozens of other recordings from a vast universe of artists. Samples of his performances lived a secondary life on the masters of a who's who of hip-hop and rap stars.

The guitarist is renowned for helping popularize the Gibson Les Paul Jr. model with P-90 pick-ups to create a tone that is undisputedly his own. More recently, he enjoyed a long relationship with Dean Guitars, releasing several signature models.

West is survived by his wife Jenni — whom he married on stage after MOUNTAIN's performance at the Woodstock 40th-anniversary concert in Bethel, New York on August 15, 2009 — brother Larry and nephew Max.