Swedish glam rock legends EASY ACTION will release their new single and the video for the track "Drop The Bomb" on May 27 via Monty Music.

This spring marks the tenth anniversary of EASY ACTION's comeback show at the Sweden Rock Festival in 2006. The Swedish glam pioneers Zinny Zan (SHOTGUN MESSIAH, ZAN CLAN) and Kee Marcello (EUROPE, K2) had not played together for over twenty years, and the show was meant to be a one-time thing. "But with the new members Simon Roxx (AMMOTRACK, VOLUME UNIT), Björn 'Grizzly' Höglund (THE SUMMIT, MARTINA EDOFF) and Michael Grimm (SUPERGROUPIES), we had so much fun, and sounded so good … that we decided to have a go at it," says Zan.

In the years that followed, EASY ACTION played several club dates and festivals, and supported TWISTED SISTER for a handful of Scandinavian dates. In 2008, the band released a new version of "We Go Rocking" and the new song "Jack's Back". By 2009, the band had written enough material for a new album, and the basic tracks were laid down in September 2009. However, as of 2011, the new album, titled "Looking Up Your Old Address", had still not been completed.

Says Höglund: "That's when we lost Michael due to complications with his diabetes, and... well that's where we left it. The album is still on the shelves."

In January 2016, EASY ACTION retrieved a hard drive consisting of multi-angle pro-shot video footage of the 2006 show at the Sweden Rock Festival.

Says Höglund: "I started going through the footage and the energy of that show just hit me! We had something special in that lineup. Seeing Michael on that stage playing with his childhood favorite band, and all the fun we had, was moving, to say the least. But there was almost no audio recorded at the Sweden Rock show, so we decided do go back to the album we never finished. The song 'Drop The Bomb' was close enough to completion so we decided to use that."

Ironically that song was written back in 1984 and intended for EASY ACTION's sophomore album.

Says Zan: "We wanted to close the book by at least releasing something from the would-be album — if not for all the people who asked about the band,. then for Michael. Though I am sure that many of the songs we wrote will surface some way or another pretty soon." 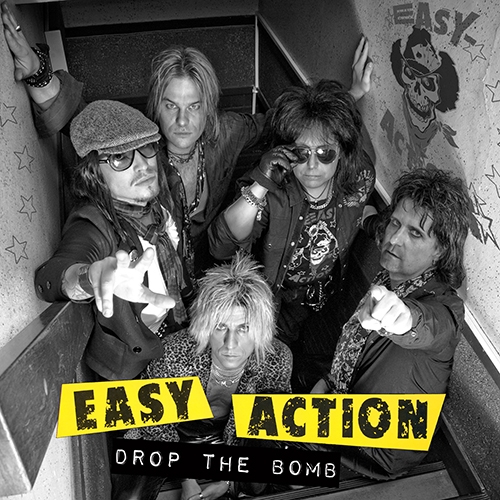