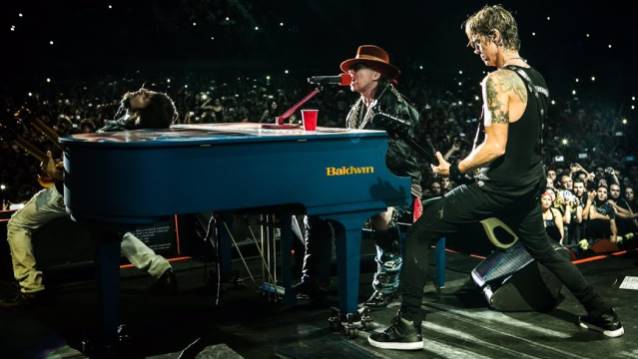 Ex-GUNS N' ROSES bassist Duff McKagan played the first of five shows with the band last night (Sunday, April 6) at Estadio Ferrocarril Oeste in Buenos Aires, Argentina. McKagan is filling in for GN'R's current bassist, Tommy Stinson, during the group's South American tour because Stinson is reuniting with THE REPLACEMENTS for two high-profile dates at Coachella.

Before launching into the MISFITS cover "Attitude" (with McKagan on lead vocals) at last night's concert, GUNS N' ROSES singer Axl Rose told the crowd: "Our regular bass player, Mr. Tommy Stinson, is doing a show at Coachella with THE REPLACEMENTS, so we had to try to find a new guy. He's hanging in there. [Please give] a hearty welcome to the new guy, Mr. Duff McKagan."

McKagan, who left GUNS N' ROSES in 1997, will play the remaining shows of the South American band's tour, including dates in Asuncion, Paraguay on April 9, La Paz, Bolivia on April 12, Recife, Brazil on April 15 and Fortaleza, Brazil on April 17.

In a statement relayed through GN'R's publicist, McKagan said that, "It's pretty great to play these songs again, and l'm looking forward to playing some gigs with my pal again. South America is always a radical place for rock 'n' roll...and I'm honored to be doing this thing, in that place."

Stinson told journalist Gary Graff that THE REPLACEMENTS shows — April 11 and 18 at the Coachella Valley Music & Arts Festival and May 10 at the Shaky Knees Music Festival in Atlanta — were locked in before GN'R decided to play in South America.

"It got to be a scheduling issue right out of the gate," he said. "I didn't want to fuck anyone up in GUNS by saying, 'Hey, I can't do this tour' or anything like that. Luckily someone was able to reach out to Duff and he was amenable to the idea and was into doing it. It's Duff being the kind of good sport he is, trying to help Axl out. So I'm like, 'Thanks, dude, for covering my ass on this one.' I think people are gonna be really stoked about it. It's gonna be fun for everyone."

"He's a fucking great bass player. [The shows are] gonna be a breeze," Stinson predicted. "The only bummer is I don't get to see one of the shows he plays, especially after playing his fucking parts for 17 years. It would be interesting to see how he plays them. There's a couple things I could use some pointers on."

McKagan joined Axl Rose onstage for the first time in seventeen years at GUNS' October 14, 2010 concert in London. He also performed with the current version of GUNS in December 2011 at shows in Vancouver and Seattle. All three appearances were for a few songs, not full gigs.

Rumors that the classic lineup of GUNS N' ROSES would reunite have been around for years, although any possibility of that happening seemed to end when the band was inducted into the Rock And Roll Hall Of Fame and Axl Rose declined to show up.

Rose told Billboard.com in 2009 that he doesn't ever expect to play again with guitarist Slash, saying, "One of the two of us will die before a reunion. However sad, ugly or unfortunate anyone views it, it is how it is." Slash stated about Axl: "He hates my guts. It's over a lot of different stuff; I don't even know. There's just no communication between us. I talk to Duff and Steven [Adler, drums], but when it comes to old GUNS N' ROSES, there really isn't anybody that makes decisions."