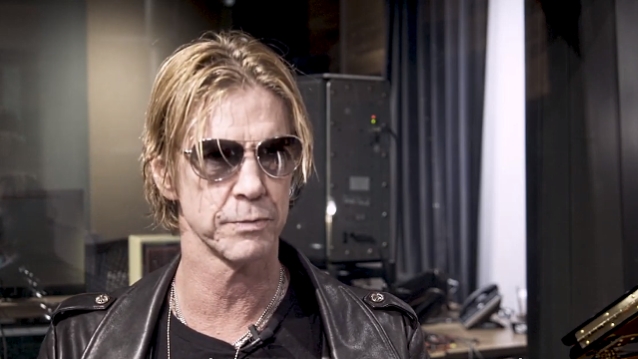 "That connectivity with the audience that I get to enjoy, that's my church," Duff said (see video below). "It's not one of ego or anything like, 'I'm on the stage and the lights.' It's just this connectivity, and it's always been that way for me.

"I saw THE CLASH in '79 in Seattle," he continued. "Some security guy had punched a guy in the front row. And there was only like a hundred and fifty of us there. We all knew each other; the punk rock community was pretty small. Joe Strummer stopped the show and said, 'Get the security outta here. Get this fence outta here, this barricade. We're all in this together, us and you. There's no difference between the band on stage and you in the crowd.' That whole moment has stuck with me to this day. And that's what's informed how I approach music, approach the live show — approach kind of life in a lot of ways too. You always see the sparkle dust on your show, like, 'This is how I really picture it to be'; this thing of unity and happiness and celebration. And that's that."

"Tenderness" will be released on May 31. The disc sees McKagan reflecting on his experiences traveling the globe over two and a half years on GUNS N' ROSES' "Not In This Lifetime" tour. Encountering heartbreak, anger, fear, confusion and divide on his travels during this tumultuous time in our world history, McKagan channeled a collective hurt into songs of monolithic power.

McKagan and Shooter Jennings began recording "Tenderness" a year ago, working out of Station House studios, located in Echo Park, California, where they wrote and recorded in-between McKagan's tour with seminal rock band GUNS N' ROSES and the release of Jennings's eponymous album, "Shooter". "Tenderness" features Jennings and his band along with appearances by The Waters and The Suicide Horn Section (which features Duff's brother Matt McKagan on trombone), amongst others.