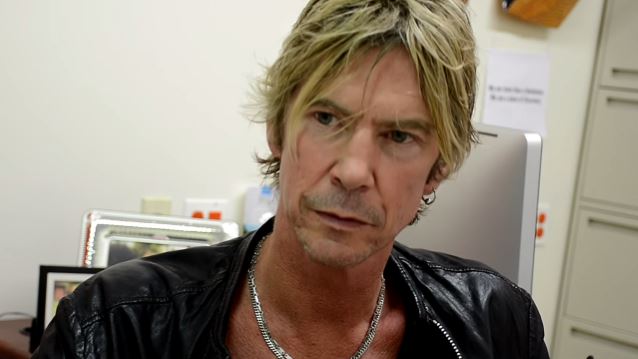 Fox 5 anchor Steve Lacy conducted an interview with Duff McKagan before the former GUNS N' ROSES bassist's May 12 book signing at the Strand bookstore in New York City. They spoke about the new Kurt Cobain documentary, "Montage Of Heck"; MCA from the BEASTIE BOYS; reconnecting with Axl Rose and the music of GUNS N' ROSES; staying in touch with his former bandmates; talking with his teen daughters about drugs and alcohol; and what it's like to be a highly recognizable rock legend on the streets of New York. Check out the chat below.

Speaking about "Montage Of Heck", which has been described as a deeply personal, no-holds-barred portrait of NIRVANA's leader via his own words, Duff — who grew up in Seattle — said: "It really illustrates some of the things I've written about. And I think it's a brilliantly done documentary. It's extremely sad at the end, but it depicts what it was like — not just with them, but with the whole… like, everybody I knew. And that's what it was like [in Seattle around that time]. And seeing that scene — those scenes at the end — kind of upset my stomach. And I watched it with my 17-year-old daughter. And to think [Kurt's daughter] Frances [Bean Cobain] produced [the film], and that was the footage she chose to be shown was really heavy."

Duff, who gave up a lifestyle of heavy drinking and drug abuse after a 1994 attack of acute alcohol-induced pancreatitis, also talked about the discussions he has had with his own daughters, 17-year-old Grace and 14-year-old Mae, about the dangers of drug addiction. He said: "Well, there's the convesations we don't need to have, because they know… I don't have to say, 'I know what I'm talking about.' They know what I'm talking about. I've talked to 'em about my genes that they might have, but I don't live in a fairytale. Just me saying, 'Just say no,' that's not gonna happen; that's like unicorns with horns. So, I mean, I'm honest. 'You might try some drugs. And you might actually like something. Here's the deal, though: I was your age, and that's when I was doing that. And I chased that first good high for thirteen years until my pancreas blew up. So you might have that same thing, and it's not cool. So just watch it.'"

McKagan shared a Seattle-bound flight with Cobain just days before the NIRVANA frontman's suicide, and was one of the last people to speak with Cobain.

Duff's new book, "How To Be A Man (And Other Illusions)", is the follow-up to his critically acclaimed New York Times bestselling memoir, "It's So Easy (And Other Lies)".