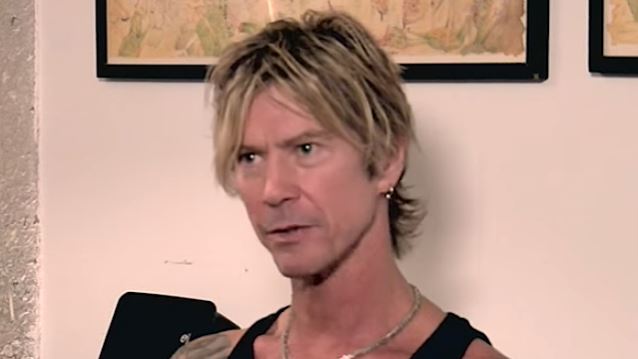 Speaking about GUNS N' ROSES' early days, Duff said: "I'd seen [Axl Rose, GUNS N' ROSES singer] in L.A. GUNS. But it was at The Troubadour [in West Hollywood]. I got there late and saw a couple of songs. And it was just like a bull loose in the ring. It was, like, 'What the hell?' And he was different. He wasn't metal, and he wasn't punk; he was like his own thing. And I identified with that. But [we got together] at this rehearsal place and he got on a mic to sort of check the P.A. and he had two voices coming out. It was kind of a low undertone and this really high, strong voice. And he was serious. He moved from Indiana, Izzy [Stradlin, GUNS N' ROSES guitarist] moved from Indiana, I moved from Seattle. We weren't here to jam. We weren't here to be in a high school band. We wanted to start something and mean it. And when those five guys — Steven [Adler, GUNS N' ROSES drummer] and Slash [GUNS N' ROSES guitarist], Izzy, Axl and myself — got in a room the first time, it was so apparent. We'd all been in other bands where there was always one weak link. There was always that one weak link up until that point. And when you've been playing since you were 13, by the time you're 20, you feel that you're a real seasoned veteran. You've toured, you've played gigs and you're not fucking around. And so I took learning to play bass and being… We all took it really seriously. Steven and I would play together. We just lived for it. And Steven and I would play to CAMEO, for Steven to get that groove. And that influenced the back groove on [GUNS N' ROSES' classic debut album] 'Appetite For Destruction'. That's all from playing to CAMEO, SLY AND THE FAMILY STONE. Just kind of playing along to probably some cassette. And then we played ourselves, and we developed grooves. And he really became probably the best small-kit groove drummer there ever was. No rack toms. [Just] a floor tom and a snare. A floor tom and a snare and a kick drum, hi-hat… cowbell. But all you got at that point is groove. Your groove's gotta be deep, or go home. And he had a great groove."

McKagan's new book, "How To Be A Man (And Other Illusions)", came out on May 12 via Da Capo Press. The bassist released a three-song EP, also called "How To Be A Man", in conjunction with the book's publication. The title track featured former GUNS guitarist Izzy Stradlin and ALICE IN CHAINS axeman Jerry Cantrell.