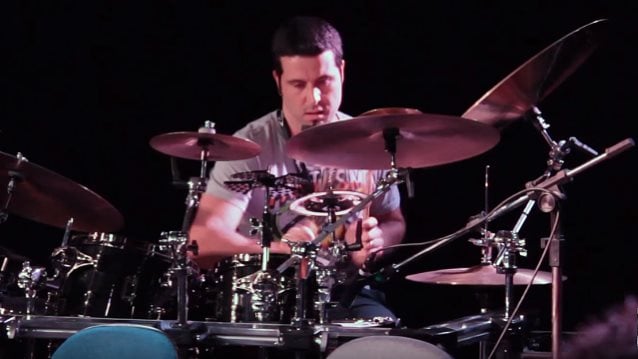 In a new interview with Billboard, drummer Jean Dolabella spoke about quitting SEPULTURA after filling the space left by Igor Cavalera, one of the brothers who started the band. When asked if he has seen the final cut of the "Sepultura Endurance" documentary, which shows him leaving the band, Jean said: "Actually, I haven't watched the final cut yet, but I got an invitation for this. The documentary is told from the perspective of the director and SEPULTURA. In the context that they show me, it wasn't only about being away from home and family. I had problems with the manager; it wasn't positive. I was raising a flag that wasn't mine, you know? I started playing with them after they'd been together for 20 years. I took over for someone. There are other sides, other stuff that wasn’t told on the documentary. And it's the band's story, not mine. In this moment, I'm going through it, but with [my new band] EGO KILL TALENT... it's different dealing with it your family by your side and with something that was created by you. It's all new and different from what was going on at that moment. No hard feeling, there was no fight... that's it. And if today we sing in English, if we want to tour Europe or the United States … I know I'll have people closer to me and I'll be able to take a breath."

Dolabella exited SEPULTURA in 2011 after a five-year run of relentless touring and two studio albums.

SEPULTURA guitarist Andreas Kisser addressed Dolabella's departure from the band in a 2012 interview with Sonic Violence. He said: "[Before he made the made the decision to leave] he didn't know what he wanted, really. I guess he didn't have too much support from his house and family, so he decided to stay closer to them and do something else in music. Too bad he left the band with an unfinished job. We [were] still touring for [the latest SEPULTURA album] 'Kairos' and we [had] a lot to do [that] year. But he is an amazing musician, brought a lot of good stuff for SEPULTURA and I wish the best of luck in his new career… [It] was all good, we talked a lot, since the beginning of 2011 and after the MACHINE HEAD tour in South America he left. We had time to prepare the change without too much hassle."

Eloy is a 26-year-old drum prodigy from São Paulo, Brazil who won the Modern Drummer "Undiscovered Drummer" contest as a teenager in 2006.

Kisser spoke about how Casagrande's addition to SEPULTURA has affected the band's sound. "The SEPULTURA music, it's very demanding drum-wise," Andreas said. "Igor was, like, the first 'monster.' He set up some standards, and, of course, Jean and Eloy are big fans of what Igor did, and they respect him so much, and Eloy respects Jean so much. But I think Eloy is the next level, man. It's something else. Maybe he's not human, I think. [laughs] It's just, like, insane. Every drummer, it doesn't matter how experienced or how big the drummer is, when they see him playing, they say, 'I have to go back to school.'"

He continued: "[Eloy puts on] a very passionate, very powerful performance. I think he is, like, the best of what Igor and Jean offer. Because Igor, he didn't go to school to learn drums; it was, like, learning drums by humself, observing and jamming a lot with his brother, playing a lot. And Jean, on the other hand, is a drummer that really went to the school to Los Angeles, to MI institute, he's a guy who can read music and he's a music teacher and stuff. And Eloy, it's both of that. He has that kind of animal, 'free' feeling of a drummer, but lots of technique as well. He can read as well, he can organize that kind of stuff that Igor was totally away from it. So I guess he's the perfect drummer for SEPULTURA. He really fit like a glove with us, and he's working out great."

"He made us better players," Andreas said. "I mean, he really brought this new motivation to be on stage and to play the old stuff, and especially the new stuff."

He continued: "On the first shows, it was really kind of difficult. We had really to be a little more focused to present the new stuff.

"Every time you have a new musician in a band, and especially a drummer, it changes a lot of your playing and little details here and there. But I think the formation now is very powerful, [and] I think it's one of the best formations of the history of SEPULTURA."