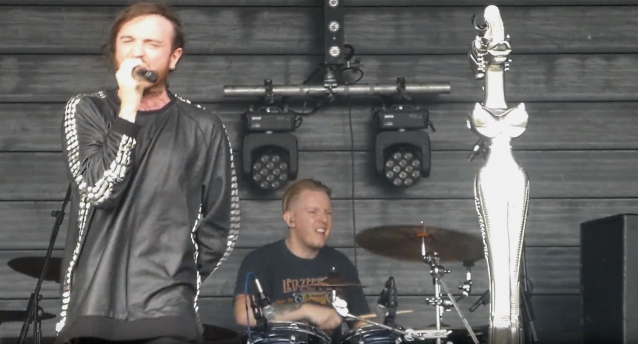 According to the Manchester Evening News, the drummer of a British KORN tribute act suffered a stroke while performing with his bandmates at a U.K. festival last month.

Alex Headen got halfway through the fourth song of KORN AGAIN's set at Rockstock in Stockport before he began to feel a pain in his shoulder. Within seconds, the left side of his body went numb and he went blind in his left eye, forcing him to stop playing the cymbals.

Incredibly, the 28-year-old finished the track with his right hand only, before collapsing and being rushed to Stepping Hill Hospital where he was treated.

He continued: "Never in a million years did I think I was having a stroke. I just thought I had low blood sugar or was dehydrated.

"I thought, 'If I get through this song, I can grab a fizzy drink or a bite to eat and carry on.

"I started the show fine but by the fourth song my vision started to go blurry, then my left arm went numb and I dropped my drum stick.

"I carried on playing with just my right arm but then I completely lost my vision in my left eye. The song finished and I collapsed on my drum kit."

Alex spent a week in the hospital's stroke unit undergoing various tests to determine how the stroke had occurred.

Alex said: "They still don't know the cause so I'm a little anxious about that. "I can't really remember much from the first or second days in hospital other than being very scared.

"My walking has improved loads over the last few weeks. I'm still struggling with my left arm and shoulder, but I'm making good progress.

"I'm very lucky that medics where close and helped me out. The [publicly funded national healthcare system] NHS [National Health Service] is a national treasure."

Earlier today, KORN guitarist Brian "Head" Welch shared a Daily Mail story about Headen and wrote in an accompanying message "Wow this guy is" and added a flexed bicep emoji.

Wow this guy is ?