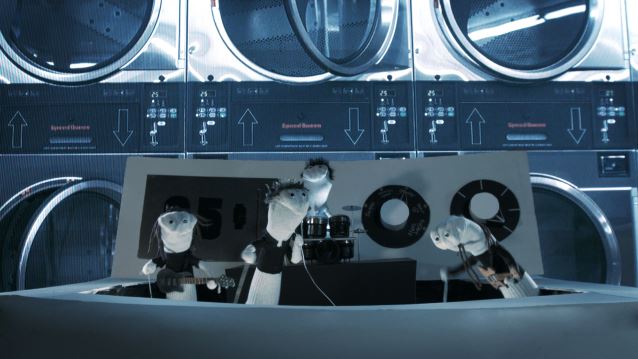 Sock Puppet Parody, which pays tribute to iconic bands and glorifies their undergarments, has posted a video for the sock-puppet act DROWNY POOL's song "Laundry" which hilariously parodies DROWNING POOL's "Bodies". Check it out below.

Sock Puppet Parody previously released videos for "Master Of Sock Puppets" which was based on METALLICA's classic 1986 track "Master Of Puppets", and "Wait In Bleach", parodying SLIPKNOT's "Wait And Bleed".

"Bodies" was the lead single from DROWNING POOL's debut album, "Sinner", which came out in 2001. The band's most popular track, it has been featured in various films, TV programs, and advertisements since its release. The song remained DROWNING POOL's highest charting single until "37 Stitches" premiered in fall of 2008.

"Bodies" was reportedly used by interrogators at the Guantanamo Bay detention camps in 2003. It was repeatedly played over a 10 days period to "stress" Mohamedou Ould Slahi during interrogations while he was "exposed to variable lighting patterns" at the same time.