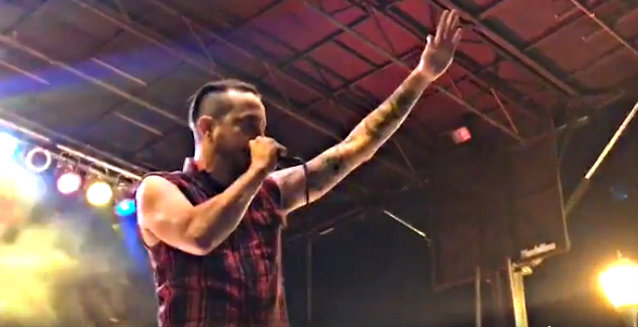 Texas heavy rockers DROWNING POOL played their first concert with singer Joey Duenas at the Rivers And Spires Festival on April 21 in downtown Clarksville, Tennessee. Duenas, formerly of the bands UNLOCO and ANEW REVOLUTION, was apparently filling in for DROWNING POOL's singer of the past five years, Jasen Moreno, who was unable to make the show.

DROWNING POOL has not yet offered an explanation for Moreno's absence from the Rivers And Spires gig or indicated when he might return to the band.

Moreno, who previously fronted fellow Texas band THE SUICIDE HOOK, is DROWNING POOL's fourth singer. Jasen replaced vocalist Ryan McCombs, who exited the group at the end of 2011 after a six-year stint in the lineup.

DROWNING POOL guitarist C.J. Pierce told Metalholic.com in early 2016 that Moreno was "our man, and he's gonna continue to be our man. The singer switch is over."

Drowning Pool at the Rivers and Spires Festival