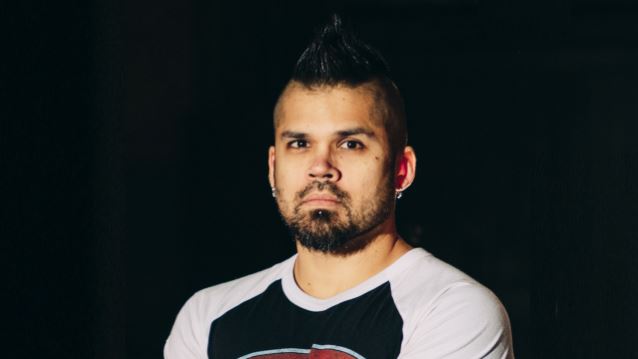 DROWNING POOL frontman Jasen Moreno says that Axl Rose would make a good replacement for Brian Johnson in AC/DC, provided that the GUNS N' ROSES singer "checks his ego" before going up on stage with Angus Young and Co.

Photos of Rose and members of AC/DC leaving the same rehearsal studio in Atlanta last month were posted online by TMZ, bringing speculation to a boil that Rose will act as a guest vocalist for the veteran Australian band on at least ten shows. The group had to reschedule the gigs after Johnson was told by doctors to come off the road or face a total loss of hearing.

Asked by Australia's Sticks For Stones web site if he thinks the Rose-AC/DC combination could work, Moreno said (hear audio below): "Yeah, I don't see why it couldn't. I mean, I was really big into [GUNS N' ROSES' debut album] 'Appetite For Destruction' and then I kind of lost interest after that record. AC/DC is… they're icons, man. You can't not like AC/DC.'

While acknowledging that it "is sad to hear" that Johnson may not be able to tour with AC/DC anymore, Moreno gave his "thumbs up" to the Rose-and-AC/DC pairing, explaining: "I think that, you know, if he checks his ego — and I'm not trying to talk messy; I'm just saying if he doesn't try to incorporate too much of Axl into AC/DC — then I think it could be fun. I think he just has to remember why he's there — that he's there to front AC/DC and not to be Axl Rose. But I don't know that guy, so… I mean, I don't think it's a bad thing. Axl Rose is an icon in his own right. [He's got a] similar vocal register as well. And he's got a hellacious attitude, so I'm glad they got somebody that'll be able to fill the room and not some unknown hack."

Rumors began circulating a few weeks ago that Rose would perform as a guest vocalist with AC/DC, with the story gaining traction after Atlanta Rock 100.5 host Jason Bailey claimed that a "very, very good source" confirmed to him that the collaboration was happening.

AC/DC postponed the last ten dates of its recent North American tour due to Johnson's condition, promising to make them up and possibly use "guest vocalists."

The band reportedly began meeting with potential guest singers in Atlanta, during which Rose was also spotted in the city.

Also not known is the official position of GUNS N' ROSES on Axl's possible stint with AC/DC. Three-fifths of the classic GUNS lineup — Axl, Slash and Duff McKagan —reunited for a show in Hollywood on Friday and is set to play more six concerts this month and a North American tour later this year.