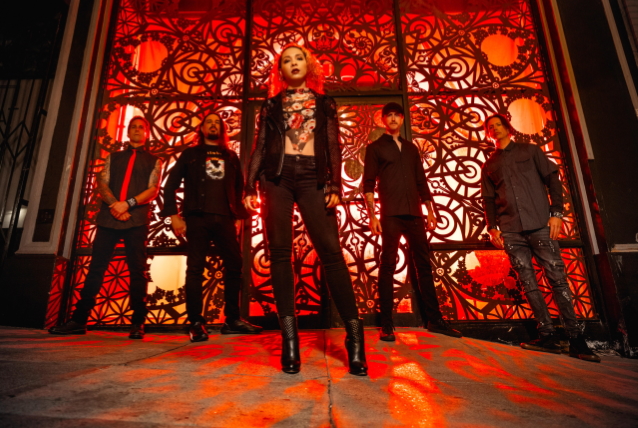 Locicero stated about DRESS THE DEAD's latest addition: "Mikey is a very well-known guitarist here in the [San Francisco] Bay Area from his many years with his band INSOLENCE. He was a 16-year-old, fresh-faced kid who got the gig when INSOLENCE signed to Maverick Records back in 1999. They toured the U.S. and Japan pretty extensively.

"Literally within minutes after our announcement that Dan Delay had to step away from the band for his family, Mikey was suggested by a friend to me. In the same instance, Mikey wrote Mark a text asking about the gig. It was very odd and seemed too good to be true, but it made a lot of sense. It seemed like Mikey was already equipped with all the essentials we were looking for.

"It's difficult to compare Mikey to other guitarists I've personally played with. He's got more attitude and punk rock to his stye than most guys I know. He kinda brings a DILLINGER ESCAPE PLAN type of energy into the mix and pushes me…. pushes all of us."

DRESS THE DEAD, whose lineup also includes Mark Hernandez on drums and James Walker on bass, is preparting to put together a recording studio to do pre-production and capture as many takes it can use on its upcoming release. The band is planning to tour the U.S. and Europe starting in the summer of 2020.

Kayla made her live debut with DRESS THE DEAD at the January 2018 benefit concert for VIO-LENCE singer Sean Killian at The Midway in San Francisco, California.

Hello all. Everyone in DtD is extremely happy to announce our newest member to the fold, Mikey Rowan!