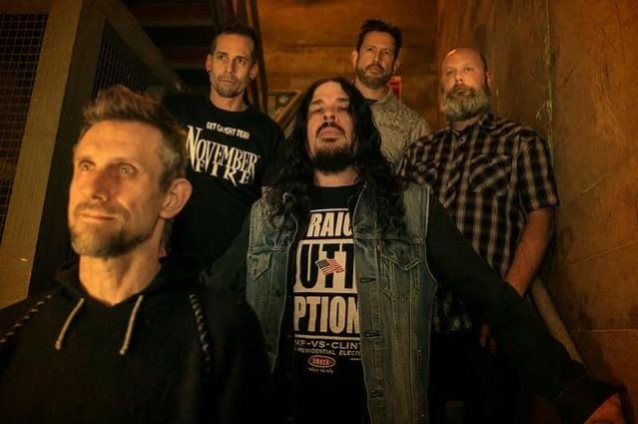 "1969", the first song from DRESS THE DEAD, the new band featuring former THE HAUNTED frontman Peter Dolving alongside ex-FORBIDDEN guitarist Craig Locicero, can be streamed below. The track was recorded at Sharkbite Studios in Oakland, California and was produced by MACHINE HEAD frontman Robb Flynn. It was engineered by Zack Ohren and mixed by Joel Wanasek.

DRESS THE DEAD's lineup is rounded out by Mark Hernandez on drums, James Walker on bass and Dan Delay on guitar.

Commented Locicero: "When I started writing music for DRESS THE DEAD, I simply started with the notion that I wanted riffs that complimented Peter Dolving and his style. I started digging into it with Mark, James and Dan and what we thought he might gravitate towards. Then he came back to us with his lyrics and melodies in '1969' and we knew for a fact that this was going to work! He defined an attitude we were trying to convey with the music and nailed it. He wrote a true fucking story.

"'This ain't 1969 no more. So why are we fighting the same goddamn war!?!?!' That says a lot in a sentence and relates to the NOW. That excited us and started the ball rolling much faster.

"Only a few short months later, we'd written a bunch of songs and recorded six of them with Robb Flynn. Robb loved the material and helped us by producing the tracks and pulling out great performances.

"Peter and Robb working together was one of the cooler things I've ever witnessed in the studio. It was all positive energy and pushing Peter further and challenging him to dig deeper. It was awesome to watch.

"This is exactly what I've been wanting in a singer at this stage of my musical life. Somebody who can tell stories and relate on the most human of levels.

"Peter Dolving is not afraid to 'go there.'

"Since this has all begun, the five of us have all become closer and better friends in a relatively short amount of time. It's not easy to put it all into words. So I'll just say this… we've got killer chemistry! That's just a fact and I believe the listener will recognize it."

Added Dolving: "So. What the hell is '1969' about? Simply put; It's a comment on the times in which we live, how it seems as we are moving backwards in society's evolution in so many ways. How everything seems upside down and inside out.

"I have learned, it's a question of attitude. Life is just life. What do I want out of my life? So I guess the only thing I can do is adress love and care.

"Seriously, if you are afraid of losing your tough-guy face by talking about love, care and communication, you are not really very tough…

"We have come to a point where it seems we have some big challenges in regards of what it means to be a human.

"I personally think we need more connectivity and communication, not everyone disconnecting off into their own private algorithms…"

DRESS THE DEAD is:

Dolving left THE HAUNTED again in February 2012, explaining in a statement that he "had fucking had it with dysfunctional bullshit." He has since been replaced by a returning Marco Aro.

FORBIDDEN's last album, "Omega Wave", was released in October 2010 via Nuclear Blast Records. The CD landed at position No. 27 on the Top New Artist Albums (Heatseekers) chart, which lists the best-selling albums by new and developing artists, defined as those who have never appeared in the Top 100 of The Billboard 200.