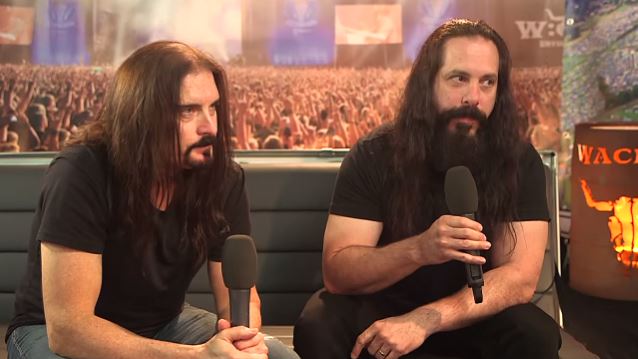 Arte conducted an interview with guitarist John Petrucci and vocalist James LaBrie of progressive metallers DREAM THEATER at this year's edition of the Wacken Open Air festival, which is taking place this weekend in Wacken, Germany. You can now watch the chat below.

Speaking about DREAM THEATER's follow-up to 2013's self-titled album, Petrucci said: "We've been in the studio since January. In fact, this tour has broken up our time in the studio. In fact, we're doing some work here on the road as well. We're very busy in hotel rooms, [doing] some last-minute writing and getting some things done. But, yeah, we've been in the studio since January. It's going great. We'll be wrapping up probably in the fall and it'll come out early next year."

On the topic of DREAM THEATER's three-decade-long career, Petrucci said: "It's amazing. Not a lot of bands can say that they've been together for that long. And it's still going incredibly well. We definitely feel like the best is yet to come, and we built something that's really special. So it's amazing. I mean, John [Myung, bass] and I, we've played together since we were, like, 12 [or] 13 years old, and I'm still standing on stage with John on bass, looking across. It's a wild feeling."

Added LaBrie: "It's pretty amazing to be in the kind of industry that we are and to say that we've been around for thirty years and we're still relevant today. You know, the fact is that we still feel that we're evolving as a band. We're continuing to grow musically, and we see that our audience and our fan base is continually being cultivated. So, just to be in a situation as that says so much. It's so much to be grateful for."