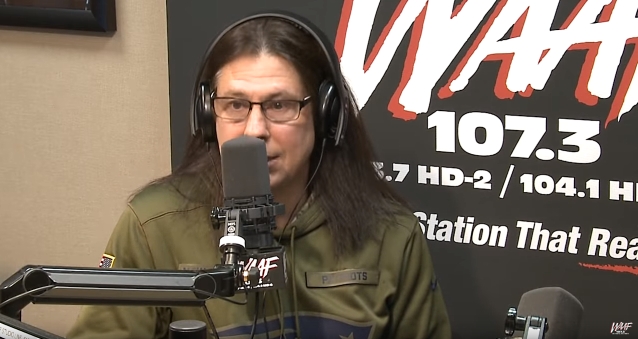 On whether DREAM THEATER fans point out the band's mistakes after a live performance:

Mike: "The new album, it's the first time since I've been in the band that all of us got together and wrote it together and showed up with ideas in the cellphone and we went away together and we cooked and we ate food and we laughed a lot. We went to Monticello, New York. There's a studio there — we have a pretty good-sized team. The team of engineers and techs, they work with other companies to get proper equipment to bring to the existing studio because it wasn't up to par to keep up with 409 drums and 97 keyboards and 22,000 guitars. So, we went away and our guitarist John [Petrucci] is our producer. John collected a bunch of ideas and we discussed the kind of record we were going to make and all of those things, to the sound, to the vibe, to the song lengths, everything."

Mike: "You also have to remember things like being a fan. We remember being fans when our favorite bands released a record and it wasn't what we were used to; it didn't make us too happy. You have to be that fan. We're aware of that, we are. We're not selfish, but we're going to do what we want. It's like, when anyone has done that, it hasn't worked out all the time. We got together, everyone played some of their ideas and John had a pen and a yellow notebook paper — we had 40 or 50, 60 ideas, which didn't even include — I had ten on my computer and we were writing. I got up three hours early, we had 12-hour days, I was there three hours ahead of time, writing a piece of music that might fit something from the day before. They were all doing the same thing or whatever. We together, offered ideas and just went with it."

On "Paralyzed", the first song released from "Distance Over Time":

Mike: "'Paralyzed' was the song that was written second, actually. It came from a discussion — 'Let's have a hard-hitting, straight-ahead thing that is very palatable and has some cool stuff in it.' It's not because I'm here, but I wrote that music, the initial riff, a version of it. That was mine, written with everyone's parts, it had keyboard, bass, drums, the whole bit and I played that, but because we had written another song the day before or two days before that was more complicated. I'm sorry, less complicated in a spot. I wrote this thing in like a strange time signature. John, he was so polite. Petrucci goes, 'Do you mind if I change a couple of notes?' I'm, like, 'I don't care!' It's the first time I've ever done anything like this. Do what you want.' People had suggestions, so he changed a few notes. Some of the guys: 'Okay, if we did a third time differently…' That stuff happens. It came out. I offered the seed, everyone contributes what they think and then it gets written, then we discuss 'Let's repeat that again. Let's not repeat that again.' It was so heavy and straightforward that it got written again pretty quickly. That's what it was. It was meant to be a song with a lot of air in the groove. I changed my drum set for it. I have a bigger bass drum and less bass drums and less drums to create a little bit more air in the sound."