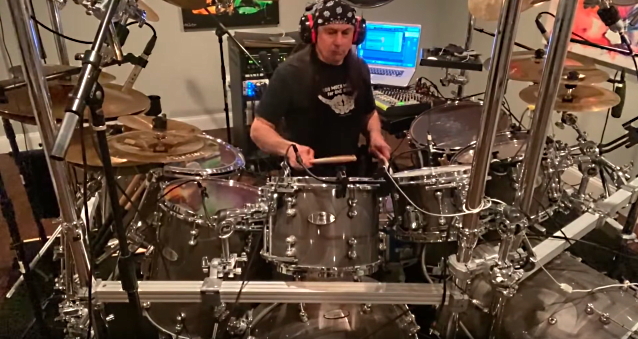 DREAM THEATER drummer Mike Mangini has uploaded a five-minute video showing "two different intentions and environments for practicing technique." He adds about the clip, which is available on his official YouTube channel: "One is on the drums to find flaws (since it is the environment we perform in,) while the other is to fix flaws on pads if possible. Here, I am using dynamics to help me focus differently than merely doing reps of exactly similar drum striking hits."

Last fall, Mangini spoke to Argentina's TMPlay about his drum setup for DREAM THEATER's "Distance Over Time" tour. He said: "I've chosen the model of drums, cymbals — I mean, basically, everything here — for the shows, because of a combination that when I play for this music, I need to be like an orchestra. In other words, with notes and low notes, so I need the small drums and the big drums. Also, I must reflect the vast DREAM THEATER catalog before I was in the band, so I have to have some of those sounds too. And I set up symmetrically and choose the types of cymbals and things, so the tones are similar on each side but different enough that I can play leftie or rightie and get a similar sound."

Back in April 2019, Mangini uploaded a video to his YouTube channel in which he explained why he sets his cymbals so high while performing live. He said: "I'm getting a lot better isolation for sound; they're more up out of the way out of James's [LaBrie, vocals] microphone; and they're actually close in, so I can feel it in my traps and down my back. But it's not injury pain — I'm actually getting a lot stronger, and it feels great. So that's really the purpose. It's a sonic thing. Also, it's a look thing, because I can see everybody; there's just more space for me. So there you go. That's why they're up high."

DREAM THEATER's 14th studio album, "Distance Over Time", was released in February 2019. The disc, which marks the first for the band's new label InsideOut Music, was produced by guitarist John Petrucci, mixed by Ben Grosse and mastered by Tom Baker.