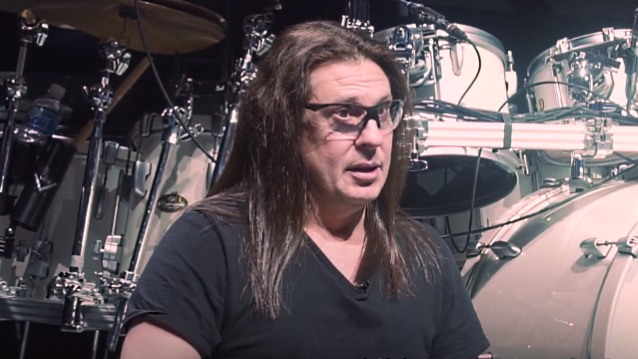 DREAM THEATER drummer Mike Mangini spoke to Argentina's TMPlay about his drum setup for the band's "Distance Over Time" tour, which kicked off earlier in the year. He said (see video below): "I've chosen the model of drums, cymbals — I mean, basically, everything here — for the shows, because of a combination that when I play for this music, I need to be like an orchestra. In other words, with notes and low notes, so I need the small drums and the big drums. Also, I must reflect the vast DREAM THEATER catalog before I was in the band, so I have to have some of those sounds too. And I set up symmetrically and choose the types of cymbals and things, so the tones are similar on each side but different enough that I can play leftie or rightie and get a similar sound."

Back in April, Mangini uploaded a new video to his YouTube channel in which he explained why he sets his cymbals so high while performing live. He said: "I'm getting a lot better isolation for sound; they're more up out of the way out of James's [LaBrie, vocals] microphone; and they're actually close in, so I can feel it in my traps and down my back. But it's not injury pain — I'm actually getting a lot stronger, and it feels great. So that's really the purpose. It's a sonic thing. Also, it's a look thing, because I can see everybody; there's just more space for me. So there you go. That's why they're up high."

In an interview with Metal Wani, DREAM THEATER guitarist John Petrucci said that there are "a couple of reasons" Mangini likes to set his cymbals at a high level. "Being the caring person that he is, I think Mike originally raised the cymbals out of the way so they wouldn't interfere with James on stage," he said. "Like, the cymbals were right at his head level. So I think part of the reasons why he pushed them out of the way was to help out James. And the other reason, if I'm not mistaken, he wanted to create more of a window, more visual access so you can see what he's actually doing."

DREAM THEATER's 14th studio album, "Distance Over Time", was released in February. The disc, which marks the first for the band's new label InsideOut Music, was produced by Petrucci, mixed by Ben Grosse and mastered by Tom Baker.