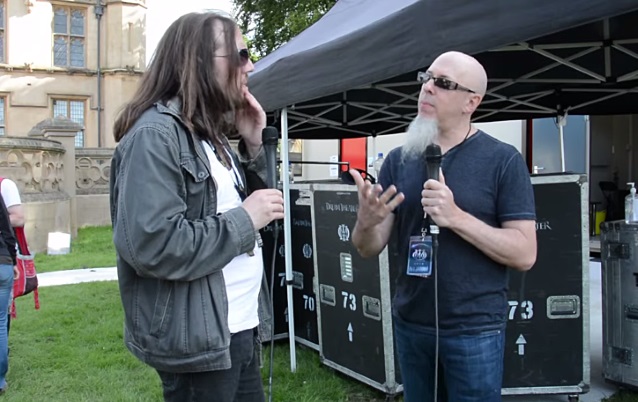 Planet Rock's Wyatt conducted an interview with keyboardist Jordan Rudess of progressive metal giants DREAM THEATER at the U.K. edition of the Sonisphere festival, which was held July 4-6 at Knebworth Park in Hertfordshire. You can now watch the chat below.

Asked if DREAM THEATER has already begun thinking about the follow-up to last year's self-titled release, Rudess told GetYourRockOut: "We haven't really gotten into serious band discussions about what's gonna happen next, although we've had little discussions between some of us about what we would like to see happen next. At the same, if I get a good idea in the middle of the night, or whatever, I'll record it onto my iPhone. I elected James [LaBrie, vocals] to kind of be the keeper of some of my ideas; I'll send him little YouTube clips of me playing something I think is cool. And then when it wraps around and we get into writing again and start our process, then we'll go back an see what we've got and kind of figure it out."