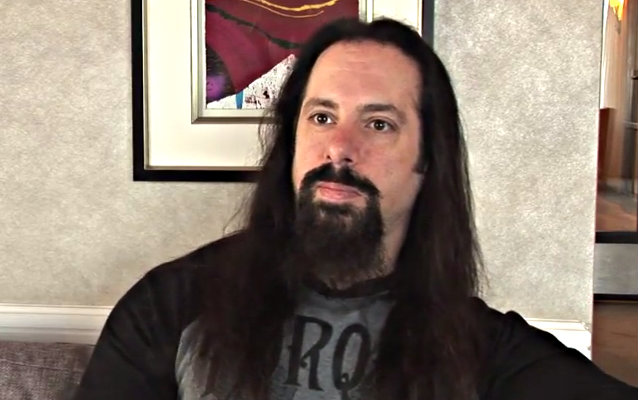 Metal Hammer editor Alexander Milas recently conducted an interview with guitarist John Petrucci of progressive metal giants DREAM THEATER for the "Metal Hammer" radio show on TeamRock Radio. You can listen to the chat using the SoundCloud player below.

Asked if it feels vindicating for him to see a new generating of bands citing progressive music as its primary influence, Petrucci said: "It does. I think it's great for the progressive community. It's been a style of music we've been playing since the beginning that we just kind of naturally latched on to, just because of the influences that we had when we were younger, but it's always kind of been this thing on the outskirts, and now it's great to see younger bands and more splintering of the style and the genre and it's just exploding, so it's great."

DREAM THEATER keyboardist, Jordan Rudess spoke to GetYourRockOut at this year's Sonisphere festival about whether the band has already begun thinking about the follow-up to last year's self-titled release. He said: "We haven't really gotten into serious band discussions about what's gonna happen next, although we've had little discussions between some of us about what we would like to see happen next. At the same, if I get a good idea in the middle of the night, or whatever, I'll record it onto my iPhone. I elected James [LaBrie, vocals] to kind of be the keeper of some of my ideas; I'll send him little YouTube clips of me playing something I think is cool. And then when it wraps around and we get into writing again and start our process, then we'll go back an see what we've got and kind of figure it out."