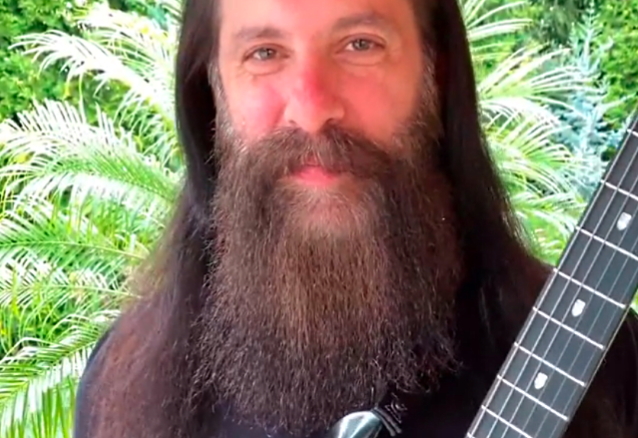 In a recent interview with Japan's Young Guitar, DREAM THEATER guitarist John Petrucci was asked about his beard styling and grooming techniques. He responded (see video below): "I, for most of my career, have had some sort of beard. I started out just clean-shaven in the beginning, but even, I guess, from the 'Awake' days, which was pretty early on, I had a beard, I had a goatee. It wasn't until… I don't know how many years now, I've got the full kind of epic beard and mustache style — it's been many years now. But I've always been into that kind of thing — how it influences your look. And I just kind of fell into this thing where having a big old-school beard, I thought, looked good on me, and I got really into the lifestyle and the bearding culture — all the products and things like that; beard oils and bums; learning to trim your beard; experimenting with different shapes. It's actually a fun hobby, honestly.

"The important thing, to me, always is to have a look that it looks like you're doing it on purpose, where there's a style to your beard, even if it's a long beard and mustache, and not something that just looks like you got lazy and decided not to shave," he explained. "So I always try to have some sort of sense of style. I let it grow to varying lengths. It's pretty long right now. Will I let it grow all the way to [my belly button], like a wizard beard? I don't know. Sometimes when it gets that long, it becomes harder to handle. But it's all about, I think, if you're interested in growing a beard like this, it's kind of what goes well with your face shape, as far as the length and the style.

"If you at all do any research on this, you'll find that there's a lot of information out there — videos, tutorials, photos, blogs. Forget about it; you could really get into it. Products as well.

"Anyway, yeah, it's a fun hobby, and I'm keeping it going, as far as I know. I can't picture shaving this for a while."

Petrucci released his second solo album, "Terminal Velocity", on August 28 via Sound Mind Music/The Orchard. The follow-up to 2005's "Suspended Animation" features guest musicians Mike Portnoy (SONS OF APOLLO, ex-DREAM THEATER) on drums and Dave LaRue (DIXIE DREGS) on bass. The effort marks the first time Petrucci and Portnoy recorded together in over a decade, as well as their first time playing together since Portnoy departed DREAM THEATER.