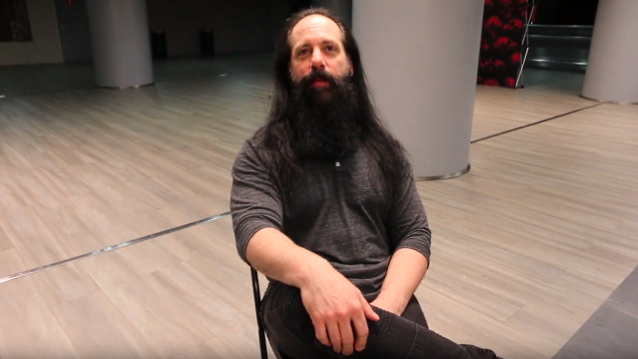 In a recent interview with Jason Cenador of Spain's Mariskalrock.com, DREAM THEATER guitarist John Petrucci was asked to name three albums that had a big impact on him. He responded (see video below): "I kind of go back to a lot of the records that influenced me when I was younger, when I was really a teenager practicing a lot. For example, I heard Al Di Meola's 'Casino' album for the first time, and that really blew me away. Steve Morse's 'The Introduction', his first solo album, one of my favorites. And Stevie Ray Vaughan's 'Couldn't Stand The Weather'. It's another one that I heard — actually, I heard it on the radio first. I heard 'Voodoo Child', his version, and I was, like, 'Oh my God!' I was, like, sucked into the radio. 'This is amazing.' Those are just three. There's so many. But those are three."

DREAM THEATER is continuing to tour in support of its 14th studio album, "Distance Over Time", which was released in February 2019. The disc showcases a newfound creativity for DREAM THEATER while maintaining the elements that have garnered them devoted fans around the globe. The album also marks the first for the band's new label InsideOut Music. The artwork was created by longtime cover collaborator Hugh Syme (RUSH, IRON MAIDEN, STONE SOUR). "Distance Over Time" was produced by Petrucci, mixed by Ben Grosse and mastered by Tom Baker.