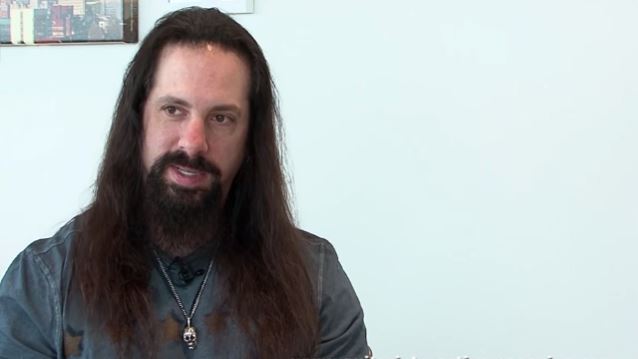 Asked about the shorter, more compact nature of some of the songs that appear on DREAM THEATER's latest, self-titled album, Petrucci said: "Actually, the funny thing is, this album, it kind of has everything, if you look at it, because that was one of the conversations we did have. It's something we did on the 'Awake' [1994] album, too, if you go back. The basic mentality is that every song doesn't have to be 12 minutes long. It's actually hard to do. The challenge is to try to write and keep the style that we write in without straying from the thing that makes us unique. And to try to do that within a four- or five- or six-minute mark, it's hard to do. But we did that on a few songs and kept the energy up and everything. And we also made sure that we did include a big epic piece on there. We made sure that there was an instrumental on there, which is something that we wanted to do. But, yeah, as far as those few songs that are kind of on the shorter side, we did say, it would be a nice challenge to try to keep things short. And it's really hard."

DREAM THEATER keyboardist, Jordan Rudess spoke to GetYourRockOut at this year's Sonisphere festival in the U.K. about whether the band has already begun thinking about the follow-up to last year's "Dream Theater". He said: "We haven't really gotten into serious band discussions about what's gonna happen next, although we've had little discussions between some of us about what we would like to see happen next. At the same, if I get a good idea in the middle of the night, or whatever, I'll record it onto my iPhone. I elected James [LaBrie, vocals] to kind of be the keeper of some of my ideas; I'll send him little YouTube clips of me playing something I think is cool. And then when it wraps around and we get into writing again and start our process, then we'll go back an see what we've got and kind of figure it out."

"Dream Theater" sold around 34,000 copies in the United States in its first week of release to debut at position No. 7 on The Billboard 200 chart. The CD arrived in stores on September 24, 2013 via Roadrunner.