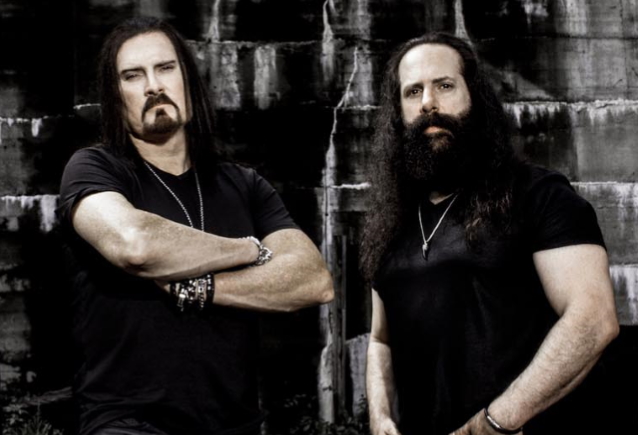 In a new interview with "Talk Is Jericho", DREAM THEATER guitarist John Petrucci and singer James LaBrie reflected on the losses this year of two of greatest and most influential rock musicians of all time: Neil Peart, drummer and lyricist for the rock band RUSH; and Eddie Van Halen, the guitar virtuoso who propelled his band VAN HALEN into one of hard rock's biggest groups.

Petrucci said (hear audio below): "It was hard. For us, with Neil, we were on tour. We were actually in Europe.

"For me, RUSH is my favorite band. Growing up, RUSH was my favorite band; that was it," he continued. "And Neil, not only obviously as a drummer, what he's contributed to the drum world, but as a lyricist to me, he was a huge, huge, tremendous influence — probably my biggest influence as a lyricist. So as tragic as all the losses that we've had over the many years of musicians who were getting older, who were sick, whatever, may be the case, Neil hit me — that was, like, a blow. That was the first time where I felt, 'Wow, RUSH will never play again.' I guess they were already retired. But I'll never read a new Neil Peart lyric; I'll never be able to see him play again. I was very sad — a really, really sad loss in that case. And, yeah, we were on the road, so it just felt really surreal and bizarre."

Added LaBrie: "The way I got through it with Neil and with Eddie is when I was on the road, any time I had, I'd start watching old videos of RUSH and just kind of experienced it and that was kind of my spirit to Neil. Like, 'Okay, I'm doing this 'cause we already miss you.' And the same thing with Eddie. The last couple of weeks, as I'm having my coffee, I have my laptop in front of me and I'm just watching these videos. Just the other day, there was this video with Eddie, and he was walking through his house taking a guy from MTV. And I was just experiencing that whole thing. You see more who the guy was. Who was he? What was he into? What were his interests. I think that's my therapy — trying to come to terms with, 'Wow, man. We lost some of the greatest people in music.' So influential."

Continued Petrucci: "Eddie is a blow too, because electric guitar, in general, hasn't been around for that long, if you think about it, when it really started — like, '50s or whatever. And you could point to two or three guys along the way that just were one-of-a-kind guys that just changed the game — whether it's [Jimi] Hendrix or… Eddie is the guy. The guitar was never the same once he came out and 'Van Halen I' came out; it just changed forever. And I can't think of any guitar player that I know that wasn't either influenced by him or blown away by what he did. Just his creative spirit and his innovation — the sound that he had and the tone he had, everything like that. And the deepest impact is that you'll never get to see him do that again. It's a weird, sad feeling. He was relatively a young man. He could have had many years of playing ahead of him, and we'll never get to see that magic, and there'll never be anyone that's the same as him. I probably can't even name five guys that had that level of [influence]; it's crazy… And that's not taking away anything from the incredible guitar players that have come since that are unbelievably innovative and incredible and amazing and mind-blowing — everything from [Allan] Holdsworth and beyond — but as far as just the iconic guy…

"In our world, it's a little bit of a bubble, so if a musician happens to pass away who is incredible and very influential in our world, and you mention it to the average person, they might not know who that person is," John added. "But in the case of Eddie Van Halen, that's Michael Jackson level."

DREAM THEATER has just released its ninth career live album, "Distant Memories - Live In London". Recorded at DREAM THEATER's sold-out show at the Apollo Theatre in London, the live release documents the band's popular world tour in support of its latest studio effort, "Distance Over Time", and the 20th anniversary of their seminal concept album "Metropolis Part 2 - Scenes From A Memory".