SpectiCast and Eagle Rock Entertainment are once again collaborating to distribute the long-awaited "Dream Theater: Live At Luna Park" concert film to theaters worldwide beginning Thursday, September 19. This anticipated cinematic event was captured over two nights during the final leg of the band's 15-month "A Dramatic Turn Of Events" world tour, which hit 35 countries. "Dream Theater: Live At Luna Park" was filmed in Buenos Aires, Argentina — home to one of DREAM THEATER's most ardent fan bases.

"Dream Theater: Live At Luna Park" runs for 160 minutes and features many of DREAM THEATER's classic tracks, including "Metropolis Pt. 1", "The Silent Man", "Pull Me Under", "The Root Of All Evil", "The Test That Stumped Them All", "The Spirit Carries On", and the recent track "On The Backs Of Angels". DREAM THEATER formed in 1985 under the name MAJESTY and has remained a top name in progressive metal ever since.

"'Dream Theater: Live At Luna Park' is a fantastic addition to our Rock In Cinema series," said Mark Rupp, co-founder and president of SpectiCast. "We are delighted to continue our relationship with Eagle Rock Entertainment, bringing theatrical releases of concerts by some of the world's best musical groups to theatres around the globe."

"This is, without a doubt, the closest a viewer at home will come to experiencing a live DREAM THEATER concert," states guitarist and founding member John Petrucci. "Between the hi-def and 3D video, the huge audio mix and the documentary-style behind-the-scenes footage, you are truly transported to the arena and completely immersed in the entire live experience."

"We have the greatest fans on the planet and the people of Argentina are no exception!" adds Petrucci. "The energy and vibe at Luna Park was truly electric and contagious. The perfect synergy between band and audience. We are immensely proud of this DVD and incredibly excited to share it with everyone!"

A trailer for the set can be seen below.

The setlists for the two concerts were as follows:

18. Metropolis Pt. 1: The Miracle And The Sleeper 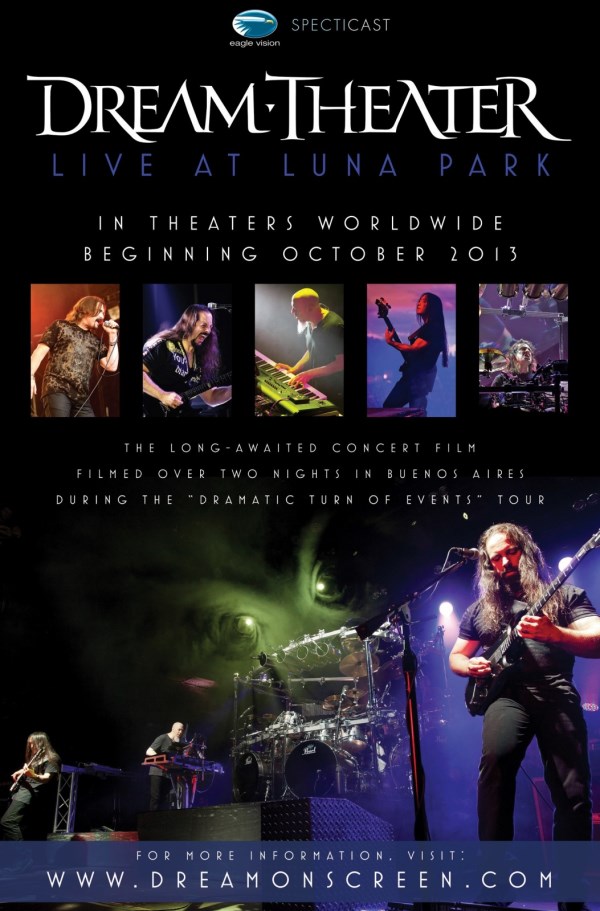