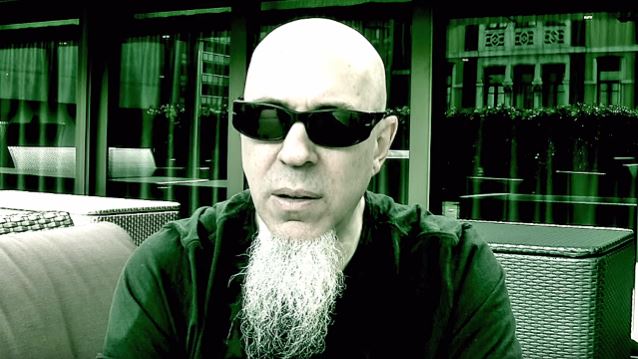 Jimmy Kay of Canada's The Metal Voice recently conducted an interview with DREAM THEATER keyboardist Jordan Rudess. You can now watch the chat below.

Asked how his role in DREAM THEATER changed after the 2010 departure of original drummer Mike Portnoy, Rudess said: "When he left, Mike is so talented at so many different things, and he had his finger on a lot of the pulses of what was making the band work. And even though there's so much capability in the band between all the guys, it still… losing him took a lot of… everybody had to kind of rise to the occasion, if you will, and say, 'Okay, we've gotta make this work. He's not here anymore.' [Laughs] From a strictly musical situation, I was already writing a lot of the music, and, of course, [guitarist] John Petrucci was writing so much of the music that it wasn't… that was not the biggest challenge at all. The bigger challenge was keeping the whole… understanding how we were gonna operate this machine and deal with the fact that Mike was such a big presence that the fans certainly needed to be… From a complete perspective, we needed to be really conscious of that so we could keep our business intact."

Pressed abut whether he was personally upset to see Mike leave DREAM THEATER, Rudess said: "Well, yeah, Mike is in so many ways a very loveable character, and then when he left, it was kind of like the foundation was changing. I remember sitting on my steps at my studio and being kind of teary and not understanding this big change. But it all worked out, and we kind of came into our own. I walk on stage every night and I have an incredible relationship, especially musically, with [Portnoy's replacement] Mike Mangini — we bond in a way that's just really, really fun and really, really cool, and I feel like DREAM THEATER is in a really strong position, still having a lot of fun."

Rudess also revealed that DREAM THEATER will "take a break" after being on the road "for almost two years." He added: "And then [we will] go into the studio and make a new album around May [2018] and see what happens."

Petrucci recently hinted that DREAM THEATER's next album will be musically inspired by the band's "Images, Words & Beyond" tour, which saw the pioneering group celebrating the 25th anniversary of its milestone RIAA-gold-certified album "Images And Words".

DREAM THEATER's latest album, "The Astonishing" was released in January 2016 via Roadrunner.