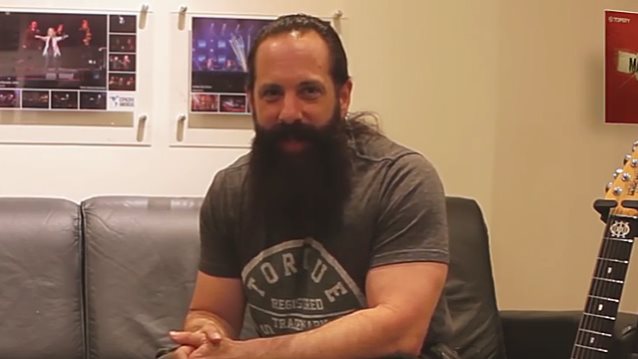 Brazil's "Madhouse" recently conducted an interview with guitarist John Petrucci of progressive metal giants DREAM THEATER. You can now watch the chat below. A couple of excerpts follow (transcribed by BLABBERMOUTH.NET).

On "The Astonishing" world tour:

Petrucci: "This is about three years in the making — beginning with creating the story that I wrote, and then presenting this to the band and Jordan [Rudess, keyboards] and I getting in, writing the music, recording everybody. And it took a really long time. We have a full orchestra, a full choir, it's a huge project. And during that period, we actually also started to work on the live show. So that took about a year. So when you see it tonight, you'll see all the content and everything that we took all that time to create. It's a very, very big project."

On the biggest challenge in making "The Astonishing" double album:

Petrucci: "I think, in general, the biggest challenge across the board was that there was so much material, so everything took longer than usual. We wrote two albums' worth of material, 'cause the album is in two CDs — two hours and ten minutes or something. And, like I said, it's fully orchestrated, and there's all of those words, all those lyrics, all those notes. Everything took a long time. That was a big challenge. Even the mix itself took two months, just to mix the album."

On "The Astonishing" storyline:

Petrucci: "Music is such an important part of our lives — of your life and my life, the band, so many people. It's such a powerful thing in our lives. It's not something that we take for granted. But in some ways, the way that music is made and the way that it is consumed and listened to, with streaming and everything else, it's very fast and passive; people don't give it the time and attention that it deserves. And so my narrative is talking about the possibilities of what would happen if that continued and we existed in a world where there was no music; people didn't play music anymore. It was only manufactured by machines. Whether or not that could actually happen… hopefully not."

DREAM THEATER has announced details of a fall North American headline tour. The trek, which gets underway October 5 at Bethlehem, Pennsylvania's Sands Bethlehem Event Center, will see the pioneering group performing their widely acclaimed double concept album "The Astonishing" in immersive and interactive settings for a unique and unparalleled live experience.