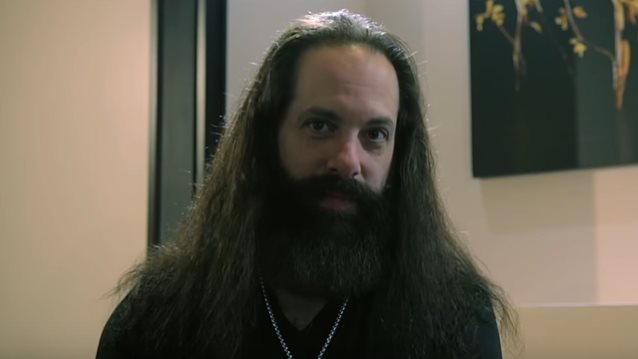 John: "We were very young back then. I was half my age, which was 25 years ago. I was 25 when I made the album. I'll be 50 in July. Wow, I'm old! How did that happen? We were young. It was only our second album; we didn't know what it was going to do. There wasn't a progressive metal scene, it didn't really exist. There was FATES WARNING, who we were friends with, a band from Connecticut. A band from Texas called WATCHTOWER, who were very technical. Of course, there was QUEENSRŸCHE and METALLICA was already doing their thing. But the prog bands like YES and GENESIS, it was like a separate thing. There wasn't a prog metal scene. It didn't exist. When we got together, we put the two together. We really didn't know what it was going to be. It felt natural to us. It felt like the right thing to do. Obviously, it turned into a full career and that album became really important for us. But, we didn't realize it back then. We were just having fun being in the studio together and creating music together. We were happy to do that."

On the origins of "Images And Words":

John: "The way that album came out was over a long period of time. Between our first album and when we went into the studio with 'Images', there was probably a year and a half or so where we didn't have a record label or singer or tour. We had some day jobs teaching or doing whatever, then we'd have band practice at night. The war started in the Middle East. It was a weird time, so by the time we got some interest from a record label and we found [singer] James LaBrie, the first thing we did was this demo, we recorded a couple of the songs in [producer] David Prater's house, then showed the label. They were like, 'Okay, cool. We'll sign you.' By the time we got into the studio, we were so happy and so hungry to be back in the studio. It was cool just as a band as far as band camaraderie. We rented a house that was pretty close to the studio and we all lived in this house. We'd go to the studio during the day and record. It was a really cool time for us."

On the concept behind the band's 2016 "The Astonishing" album:

John: "What's happening here in the world where things that people used to do are now done by robots and machines. I always bring this example up, like self-driving cars. Something we couldn't have imagined, but probably imagined that soon nobody will have to drive, right? There will be just self-driving cars. My idea was, what if art wasn't done by people anymore? Like, computers can do it better. What would happen? That was the whole basis in the story of 'The Astonishing'. The world breaks down because without that sense of expression…people love to express themselves creatively, whether it's through art, music, dance, cooking, whatever. What would happen if that was gone? The world would be this desolate, depressing place. I wanted to show the power of music and what a big effect it has on people and how important it is in the story. The character Gabriel is the one who has this gift of music who saves the world. It's all about the importance of music."

On how progressive metal has developed over the years:

John: "Now, fast-forward to today, there's so many different offshoots of progressive music. There's more traditional, there's different metal, there's all these crazy versions, sometimes what people call 'progressive' to me doesn't sound progressive, so I don't know. I don't really know anymore, but I know from our perspective, like when we would listen to a RUSH song like 'Hemispheres,' or we would listen to 'Close To The Edge' by YES, the thoughts we had were like, 'Wow, you don't really have to follow any form. The song doesn't have to be three-and-a-half minutes. It doesn't have to keep repeating the chorus.' Or, 'Hey, we can have a guitar solo for two minutes, then completely change to a whole mellow section.' This whole mindset that you can do whatever you want, it's a freedom. To me, progressive music has this sense of freedom in style. You can do whatever you want. You can put in any style of music. If you want a little Latin samba in there, stick that in there. You want to go to a crazy metal riff, put that in there. You don't want to repeat the chorus, fine, it doesn't matter. You want to end with a guitar solo? Why not? There's no rules. That's what makes it progressive. That can be in the forum of being very technical or not. PINK FLOYD is progressive; they're not very technical, but all those songs take you on this journey. It's almost like storytelling in music. With 'The Astonishing', having a story, then scoring like you would to a movie with music. The music doesn't make any sense form-wise, it just follows what's happening as you're telling the story. To me, that's progressive music."

DREAM THEATER is celebrating the 25th anniversary of its milestone RIAA-gold-certified album "Images And Words" on a European tour, which kicked off on January 30 in Rome, Italy. Each performance sees the iconic progressive rock band delivering an unparalleled live set of "Images And Words" in its entirety along with fan favorites from their renowned catalogue.