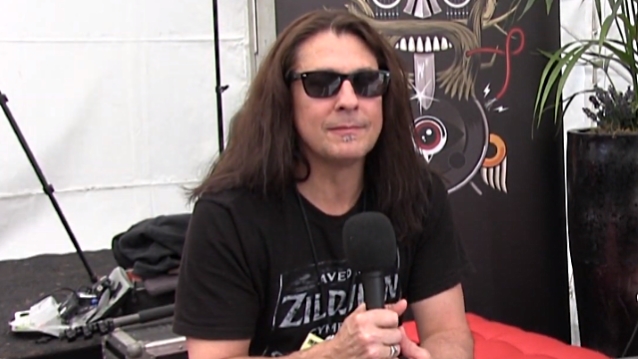 Prior to DREAM THEATER's performance at this year's Download festival at Donington Park in Leicestershire, England, drummer Mike Mangini spoke with Heavy TV. The full conversation can be seen below. A few excerpts follow (as transcribed by BLABBERMOUTH.NET).

On his contributions to the group's latest album, "Distance Over Time":

Mike: "It's great to be part of an effort that everybody was on the same page [for]. It's like a sports team — you cannot have a guy or a person taking it away. Otherwise, it's not as focused. That's all I really cared about. Contributing music, songs, parts with bass, guitar. [Saying] 'Here's a song idea' for the first time, it wasn't so much about personally doing it — it was more that everybody was involved doing that, and everybody had something to say about everybody's offerings. It was a team effort. It was amazing to be part of a team."

On the fact that the album's recording sessions took just 18 days:

Mike: "Opinions vary on that — 'Well, that's not enough time.' Whatever. Opinion don't even matter. The fact is, we were on the same page, so when a riff came up, we knew where to go next. We just all knew what we were doing. That's why it went the way it did."

On his "rhythm-on-canvas" art collection:

Mike: "I was asked to take light drumsticks and film in the dark in a very slow exposure. When I thought about what I could do that might represent me or whatever it is I have to say or express artistically, it's about symmetry. I love it — the study of physics; I love math; I love the symmetry of the drums and words that are symmetrical. I just happen to like it — I can't help it. With my artwork, I asked the photographer what the exposure time was. When he told me that it was five seconds per click, I heard 60 beats a minute in my head, and I played shapes so that X amount of shapes would fit in five seconds. That way, when you look at the exposure and then the set of exposures together [and] superimpose them on [one] another, you could see the same symmetrical image. And it worked, but I had to time them perfectly to do it. It's hard. I spent decades understanding what 141 beats a minute sounds like versus 67 beats a minute. I can hear it in my head, and having worked on the shapes, I just picked ones I thought would look good."

On his earliest musical memory:

Mike: "Setting up cans when I was two and a half, playing along to BLOOD, SWEAT & TEARS. I think it was [to] 'More And More'. I opened up the record and looked at the shape of the drums and set up the cans so they would look like the drums."

On whether he can think of a country in which he hasn't yet performed live:

Mike: "We haven't been to Antarctica, and I don't want to go. That's for METALLICA. It's too cold for me."