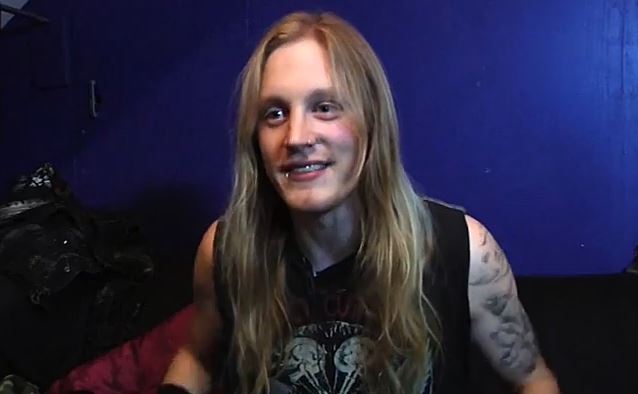 On September 19, Rock Made Of Metal conducted an interview with vocalist Marc Hudson of British epic power metallers DRAGONFORCE. You can now watch the chat below.

DRAGONFORCE's new album, "Maximum Overload", was released on August 19 in North America via Metal Blade and August 18 in Europe through earMUSIC, the Hamburg, Germany-based international rock label which is part of Edel Group. The CD was recorded at Fascination Street studios in Örebro, Sweden with Jens Bogren, who has previously worked with OPETH, THE DEVIN TOWNSEND PROJECT, AMON AMARTH, KATATONIA, SOILWORK and SYMPHONY X, to name a few. It marks the band's first-ever album involving an outside producer, having historically opted to record themselves in association with Karl Groom.

"We called it 'Maximum Overload' because it kind of describes the music and what's going on there," Marc told Rock Made Of Metal. "There's so much technical guitar playing and technical stuff thrown in there, vocals and everything, so we just thought 'maximum overload' kind of encompassed the whole thing of how ballistic we were getting on the album."

He continued: "It's a really diverse album. There's lots of new influences in there. We've got a producer, Jens Bogren, who's been helping us with it, so he's brought some extra stuff to the table and Fred's [bassist Frédéric Leclercq] been doing some more songwriting. It seems to be getting very well received, so we're very happy."

"Maximum Overload" is the follow-up to 2012's "The Power Within", which was the band's first with Hudson.