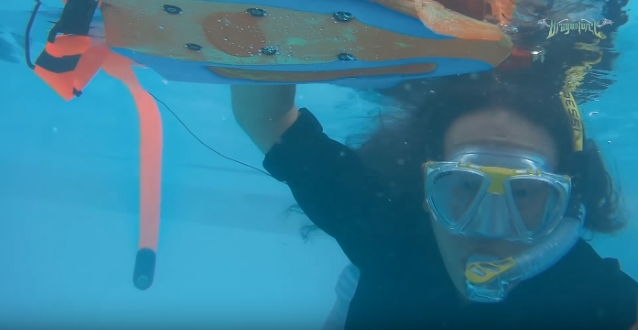 The cruise ship, which set sail on September 2 from Bremerhaven, Germany to Invergordon, Scotland, had to change path and go back around to avoid the storm, just so DRAGONFORCE could perform on the pool deck while all the other bands were moved indoors.

Prior to taking the stage, Li, who previously performed what was at the time believed to be the first-ever underwater guitar solo on the 2015 edition of the Full Metal Cruise, commented: "It's not a trick that I have practiced for over a year. I tried it in my own pool at home, but that was a year ago, and I haven't had a chance on this tour to practice it. And the idea came… You know, the underwater guitar solo was cool, but I didn't play in the water long enough, because there's only how much long I can hold my breath for. So this time we're gonna do an underwater snorkeling guitar solo, [where] I'll play over a minute of a guitar solo in the water, breathing through a snorkel, with just my hands coming above the water, with my special customized waterproof guitar that Ibanez Custom Shop built for me."

Info and tickets for Full Metal Cruise VIII, which sets sail in the Mediterranean Sea in April 2019, can be found here.

DRAGONFORCE has spent the last few months working on material for its next studio album, tentatively due in September 2019. The band has also made a number of European festival appearances this summer, including at the Download festival in the U.K. back in June.

Li recently launched his own Twitch channel where he is giving away his personal Ibanez signature guitars, and will be livestreaming recording sessions of the brand new DRAGONFORCE album.