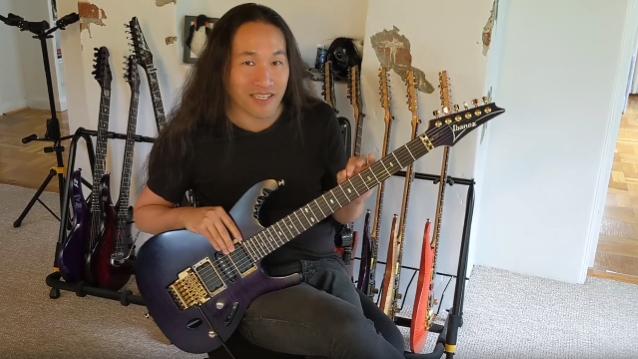 DRAGONFORCE's Herman Li is auctioning off a one-of-a-kind guitar from his private collection.

He says about the instrument: "It's an Ibanez pre-EGEN 18 TVF Prototype with an Edge bridge, the only one like it ever produced! This guitar was used on DRAGONFORCE's Billboard Top 20 album 'Ultra Beatdown', and on tour in 2008 to 2009. Recently it was used for recording solos on the latest DRAGONFORCE album, to be released in the fall of 2019! This guitar was recently professionally setup by the Ibanez Los Angeles custom shop. It sounds and plays beautifully and the weight of it is perfect. This EGEN18 Prototype is ready for many more years of playing to come!

"I'll include a personalized message with the guitar, and provide some awesome extras (signed T-shirts, posters, picks, and more)!"

Not only is this guitar unique, it is being auctioned for a great cause.

Li says: "100% of the proceeds of this auction will go to benefit the family of Cody Spiess. Earlier this year, Cody was diagnosed with Crutzfeldt-Jakob disease (CJD), an extremely rare brain disease for which there is no treatment and no cure. CJD causes rapid dementia and it is always fatal, usually within a year of diagnosis. Cody is a beloved member of his community — he is an honest and skilled auto technician, a BMX racer, a father and husband. He will leave behind a wife, two small children, his sister Cassidy and his parents.

"As you all know, bills don't stop when a loved one gets ill. Cody has not been able to work since December. His wife is supporting their sons, age 2 and 4, and his family will be responsible for medical bills, end-of-life care, and funeral costs."

If you're not bidding but you'd still like to donate, go to Cody's GoFundMe and learn more about his story.