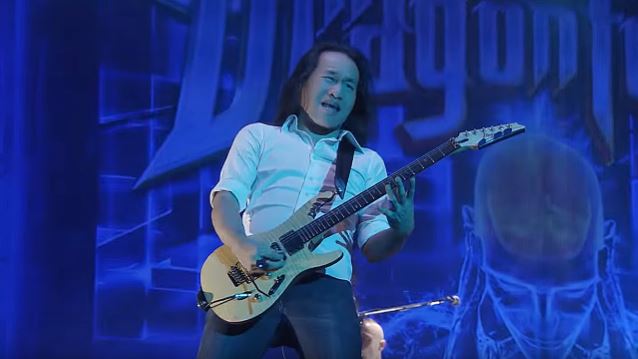 MTV Japan conducted an interview with vocalist Marc Hudson and guitarist Herman Li of DRAGONFORCE during the band's September 2015 Japanese tour. You can now watch the chat below. A couple of excerpts follow (transcribed by BLABBERMOUTH.NET).

Herman: "DRAGONFORCE's music… Our approach is to mix many styles of rock and heavy metal together. But we make sure that the songs are very melodic and [that they have] great singing and melodies, and at the same time a lot of energy. People talk a lot about speed, but that's not what we are only doing — not just fast songs, but really good, memorable songs."

Marc: "To me, this is my first tour of Japan. Obviously, I've played [the] Loud Park [festival] before. But, having come here and gone to the smallers shows in the individual cities, I have to admit that I absolutely think that the Japanese fans are some of the best in the world. And I don't see that quiet side at all. I see people that really enjoy the music, and people seem to hang on every word that I say, so everyone's listening to everything and paying you the respect that you should be paid, I think, when you're on stage, instead of talking amongst themselves and everything. And at the same time, yeah, if I ask for a circle pit, I get a circle pit — every time."

Herman: "I think one of the best things about, on this tour, the Japanese fans, compared to the rest of the world, is [that] they're really there to enjoy the moment we give them instead of just taking out their phone and filming. They're not here holding the phone. When we tour in America and Europe, they spend half an hour just holding the phone in the air and watching the screen, trying to film the show. Here, they're actually just trying to enjoy the music when there's a real human being playing in front of them. Why would you look at a little screen? Even if you don't look at it, you're distracted by holding something. You're just there to enjoy it. And that's how I would like to enjoy a show."

Marc: "Yeah, absolutely. It's kind of like going back a bit, in a way, 'cause I think nowadays people tend to film stuff, but they didn't enjoy it on their face, when they're filming it. Whereas every single show we've played [in Japan], I haven't seen any phones out. I think that's so refreshing, because this is the only territory, I think, where that is really… You know, people don't wanna film stuff, 'cause they wanna enjoy it for the moment."

DRAGONFORCE recently released its debut DVD, "In The Line Of Fire", via Metal Blade. Shot in high definition during the band's show at 2014’s Loud Park festival at the Saitama Super Arena in Tokyo, Japan, the DVD was filmed using nine camera angles to capture the raw energy of DRAGONFORCE's show and instrumental dexterity for which they are rightly celebrated worldwide.