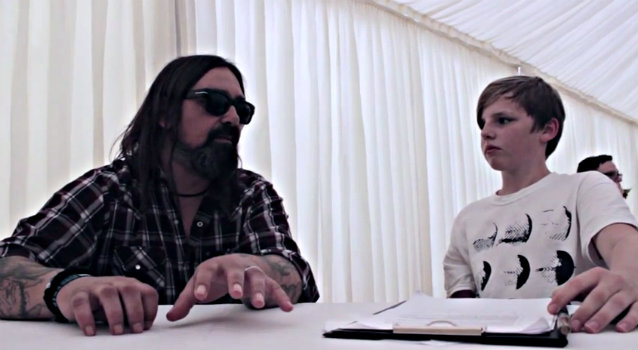 Elliot Paisley of EQPTV conducted an interview with DOWN drummer and EYEHATEGOD guitarist Jimmy Bower at this year's edition of the Bloodstock Open Air festival, which was held August 7-10 at Catton Hall, Walton-On-Trent, West Midlands, United Kingdom. You can now watch the chat below.

DOWN's new EP, "Down IV - Part Two", sold around 10,000 copies in the United States in its first week of release to debut at position No. 23 on The Billboard 200 chart. Released on May 13 via Down Records/ADA Music, the effort was tracked at Nodferatu's Lair — iconic vocalist Philip H. Anselmo's home studio — and produced by Michael Thompson, Anselmo and DOWN.

Guitarist Bobby Landgraf made his formal stage debut when DOWN headlined Anselmo's first annual Housecore Horror Film Festival in front of a packed audience of the faithful in October 2013.

EYEHATEGOD's new, self-titled offering studio recording was released in May via Housecore Records. The recording process for the CD started with producer Billy Anderson back in the fold (he recorded 1996's "Dopesick"). The session saw both producer and band not quite on the same page and at the end, the album was unfinished. A few months later, the band reconvened at longtime friend Phil Anselmo's home studio with producer Stephen Berrigan (DOWN). Both Anselmo and Berrigan helped draw out the missing pieces to one of underground metal's most anticipated albums in years.

An unexpected tragedy occurred shortly upon returning home from a five-week European tour in the fall of 2013: Joey LaCaze passed away due to respiratory failure. An outpouring of condolences and tributes spread online. Fortunately, LaCaze's drum tracks were captured by Anderson and appear on the album, creating the definitive tribute for the member of the band who encapsulated best just what EYEHATEGOD was all about; seriously not taking yourself too seriously. New Orleans native, Aaron Hill (MOUNTAIN OF WIZARD, MISSING MONUMENTS), took over for LaCaze without missing a beat, both figuratively and literally.