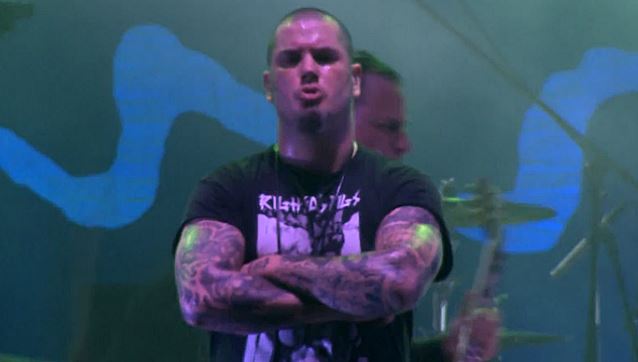 Professionally filmed video footage of DOWN's August 9 performance at this year's edition of the Brutal Assault festival, which was held in Josefov, Czech Republic, can be seen below.

DOWN's latest EP, "Down IV - Part Two", sold around 10,000 copies in the United States in its first week of release to debut at position No. 23 on The Billboard 200 chart.

"Down IV - Part Two" was released on May 13 via Down Records/ADA Music. Tracked at Nodferatu's Lair — iconic vocalist Philip H. Anselmo's home studio — and produced by Michael Thompson, Anselmo and DOWN, the new EP is the eagerly anticipated sequel to "Down IV - Part One". The new offering from DOWN is packed with the quintet's signature gargantuan riffs, swamp blues leads, crashing drums and hypnotic howls, upholding a certain tradition that countless fans celebrate, expanding their own musical mythos as they leave its pillars intact and untouched.