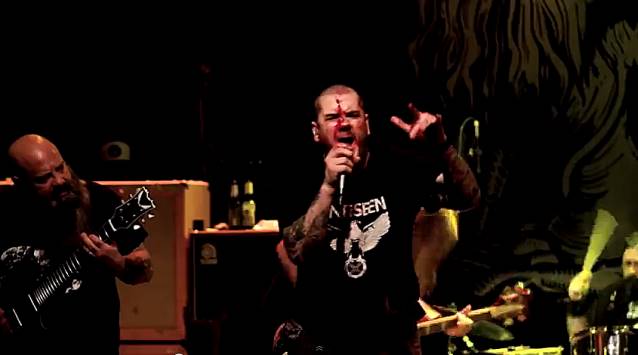 Professionally filmed video footage of DOWN performing two more songs — "Hail The Leaf" and "Stone The Crow" — on May 31, 2013 at the House Of Blues in New Orleans, Louisiana can be seen below. The footage was shot by Mike Holderbeast and the Cement Level crew.

In a recent interview with the "Devil Horns" podcast, Windstein stated about his decision to leave DOWN: "My life's changed a lot in the last year. With being married, I wanna concentrate a lot more on my family first and foremost. And DOWN, with us getting older and Philip's voice and now DOWN has to take a fairly amount of days off in order for Phil to rest his voice properly, which is totally, absolutely understandable and well respected. It's just, for me, I like to go out 15 shows in a row and get it done. With DOWN, a lot of the [touring], especially internationally, is fly dates and things like that and there's so many days off. And really, for me, to be blunt, on those off days, man… I mean, show days are great, I have a responsibility, of course I love every second being on stage, but on those off days, I have absolutely nothing to do and it just ends up turning into drinking too goddamn much and wanting to not be there… The guys could see I was kind of not really getting into it, they could see me on the off days hitting the sauce harder than I should have been — no doubt about it."

He added: "It was kind of a mutual thing — no hard feelings or anything whatsoever like that. There's absolutely zero drama, zero gossip that I know of, at least from my side. I doubt there's any from their side. I've spoken to the guys. In fact, Bobby Landgraf from HONKY, that's taking my spot, is a very good friend of mine; he teched for me for awhile and he's been teching for Pepper [Keenan, DOWN guitarist]. I spoke to him the other day and he can use my rig that I used with DOWN for [DOWN's appearance at the Housecore Horror Film Festival] coming up, and he's actually gonna come and me and him are gonna jam a little bit on some tunes. He's got a few questions. He's an amazing guitar player, but it's hard to get every little lick down of somebody else's stuff, so he asked me if I could pop by and jam with him a bit. I said, 'Absolutely.' Anything I could do to help out would be great."

DOWN entered Anselmo's New Orleans studio, Nodferatu's Lair, on October 7 to begin recording a new EP that is tentatively due in early 2014.