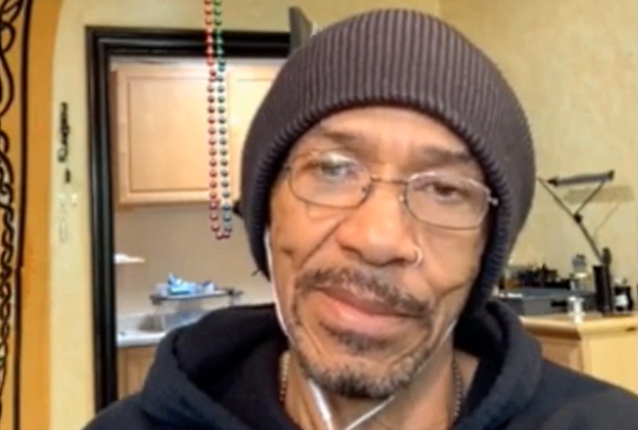 KING'S X frontman Doug Pinnick has confirmed that the band's long-awaited follow-up to 2008's "XV" will finally arrive in 2020. "We haven't figured out the [exact] date yet," he told Rock Titan VJ Scotty J in a new interview (see video below). "We want it to be right when it comes out. We don't wanna rush and have to have a deadline. It's gotta be a good record. I mean, when you put 15 records out, or 14 — I can't remember now — we can't just shit out another record. This has gotta be better than anything we've ever done or we're not gonna put it out. And that's no ego. It's just that that's what we wanna give to our people. It's not worth it if it's not gonna be up to par. We're not doing it just to go in and make a record. We waited this long just to be ready. I think everybody's on the same page now when it comes to going forward and making this record the best we can. And having faith in ourselves. I mean, think about it — we've been together for — God — almost 40 years, and we've never had a hit record, really. So we're pretty jaded. We're not expecting it to sell a lot, but we believe our people will love it."

Asked what fans can expect to hear from KING'S X on the upcoming record, Pinnick said: "I think that we took every song and tried to individually mix, create and vibe everything different from the next song. So, each song is different — drastically different. People that have heard it, several of my friends have heard rough mixes, and the majority of 'em all say, 'It sounds like KING'S X, but it's not KING'S X.' There's not hardly anything reminiscent of anything we've done before — musically, genre type, a flavor. KING'S X has a flavor, you know. And it's just different. Even from one song to the next, Michael Parnin, who's producing it and engineering it, just said, 'I can't believe these two songs are on the same record.' And we just go, 'Yeah, I hope this works.'

"We go from MESHUGGAH to [THE BEATLES' classic song] 'Penny Lane' — our own take on it," he revealed. "So we've got some fucked-up math to THE BEATLES, with flowers [laughs] and with trumpets and violins. We threw everything in. We're pulling a cello and the violin and stuff like that, and incorporating stuff into songs — like we did on the fourth album. We just decided to make every song a hit song, the best we can make it.

"I listen to it and I go, 'We've all got a hit song on this record' — all of us. Ty's [Tabor, guitar] got one. It's like the best of the FOO FIGHTERS; I love this song. And Jerry's [Gaskill, drums] got one that is so BEATLES-ish that I think that those guys are, their spirits are walking around through the room.

"MESHUGGAH is one of my favorite bands, and I got to know those guys, so I've got some fucked-up math stuff going. And we're not trying to imitate anybody — we're just being inspired.

"We really went back to the old thing, the things that moved us the most and the things that touched us," Doug added. "We're trying to channel that attitude and that vibe. So this record is — every inch of it is something that we're behind and we enjoy doing it. I don't wanna put another record out and go, 'I can't listen to that. I can't deal with it.' Most records that KING'S X has done, I can't listen to it. I just go, 'Oh, I wish I could fix that and that and that.'

"We've made so many records, and I'm 69 years old, and we've all learned a lot in music. There's so much music that's going through our heads and that we listen to that the only thing we can do is make a good record. I feel that we know what we like, and if we know what we like and we put it down on tape, then it's gonna be good, because we love it. So, we hope everybody loves this record."

Last month, KING'S X canceled all of its previously announced tour dates for 2019 so that Gaskill could undergo undisclosed heart "procedures."