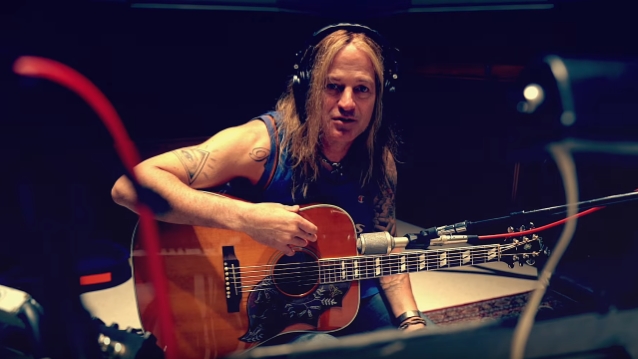 BURNING RAIN was founded by former WHITESNAKE and current THE DEAD DAISIES axeman Doug Aldrich together with singer Keith St. John (KINGDOM COME, ex-MONTROSE). The lineup for the new album is rounded out by Brad Lang (Y&T) on bass and Blas Elias (SLAUGHTER) on drums.

In a brand new interview with the "Friday NI Rocks Show", Aldrich stated about "Face The Music": "I wanted to work it so that it was not gonna interfere with THE DEAD DAISIES at all. Because last time, when we released the last record, it was just in the middle of a WHITESNAKE album process. And as with THE DEAD DAISIES, if I'm working on an album process, it's kind of hard to promote the record properly. So I wanted to time it so that I could actually do some things with BURNING RAIN to promote the album."

"Epic Obsession" came after a long hiatus from the release of BURNING RAIN's second album, "Pleasure To Burn", in 2000.

Frontiers also reissued the long-out-of-print first two albums from BURNING RAIN, the self-titled debut (released in 1999) and the aforementioned "Pleasure To Burn". Both LPs were repackaged and remastered and contain two bonus tracks each.

BURNING RAIN's previous efforts received great acclaim in Japan and the U.K. prior to Aldrich being tapped as guitarist for WHITESNAKE in 2002.