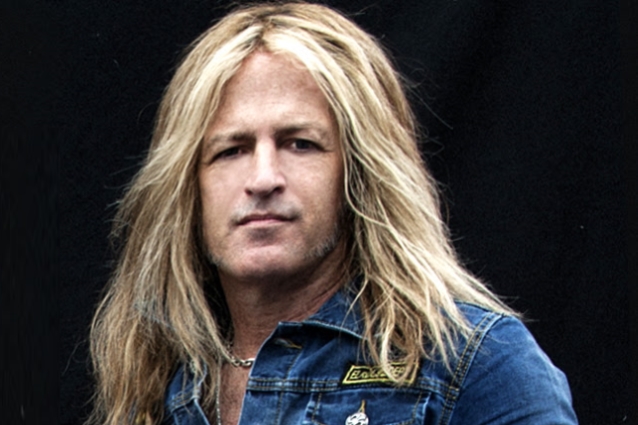 Guitarist Doug Aldrich, who was a member of DIO for a short period between 2002 and 2006, spoke to "The Blairing Out With Eric Blair Show" about his contributions to the band's "Killing The Dragon" album.

"I only wrote two songs with [Ronnie James Dio] on that, 'cause he had already written [the rest of] it," Doug said at last month's NAMM show in Anaheim, California (see video below). "But it was great, man. Ronnie was very focused. He knew what he wanted. Me and Jimmy Bain [bass] got together and we put together about five or six pieces of music — mainly around a riff — and Ronnie chose the two. 'Scream' and 'Along Comes A Spider' were the two that I wrote with him."

Doug continued: "Ronnie was amazing. He was such a great guy. I miss him all the time. I picture him in his house, where I saw him hundreds of times. I'd come in his house in the morning and he'd be in his kitchen, listening to sports radio, listening to the New York Giants radio. And then he'd say, 'Okay, let's go downstairs.' We'd go down to the studio and we'd sit there the whole day creating.

"It was great, man. What a great experience."

Asked if he and Ronnie made their own meals or if they had somebody cook for them, Doug said: "Usually we would not eat. We'd go there and we'd work until about seven and then go home and eat dinner or whatever. But Ronnie loved to do is Ronnie's favorite thing — one of 'em — was Indian food. He'd say, 'Let's go get a curry.' Or, 'Let's order out for curry.' If we were in England, every night the food would be curry — every night. Hot, spicy vindaloo — he loved it. Ultimately, that's not super healthy for you, but he loved Indian food. That was his favorite."

Having also played with LION, HOUSE OF LORDS, BAD MOON RISING, HURRICANE and Glenn Hughes, Aldrich joined THE DEAD DAISIES in 2016 and can be heard on that band's last couple of albums, 2016's "Make Some Noise" and 2018's "Burn It Down".