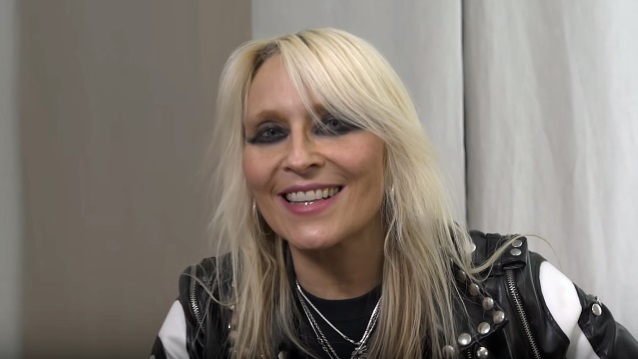 Pesch says: "The writing proccess of the album is done and we're currently finalizing the mixing.

This new record is going to be a diverse album with many fast songs and countless metal anthems. To be honest, one of these songs could become the next 'All We Are'!"

According to Doro, the first song she wrote for the new album is a track dedicated to iconic MOTÖRHEAD frontman and Doro's longtime friend Ian "Lemmy" Kilmister. "It's called 'Living Life To The Fullest'," she says.

In the usual Doro tradition, there will also be another German-language song on the album — a midtempo track tackling the topic of a deep friendship, just as in "Für Immer".

With her new album, Doro and her band are going to celebrate their 35th group anniversary on a huge world tour starting in late summer.

Doro told the "SixX Strings" radio show that her forthcoming album would contain a special song featuring guest appearances by a number of prominent metal musicians, including Johan Hegg from AMON AMARTH, Mille Petrozza of KREATOR and SABATON's Joakim Brodén. She said: "It's a great anthem — I think it could even top [WARLOCK's classic track] 'All We Are' — and everybody's singing on it. And this could be really, really good. It's hooky like hell."