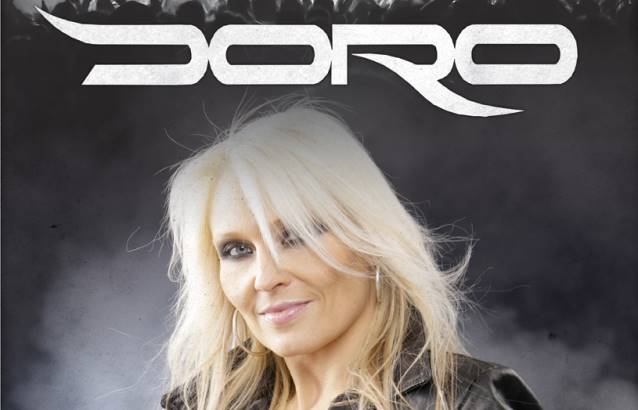 Fan-filmed video footage of Doro Pesch's October 15 performance at Atak in Enschede, The Hetherlands can be seen below.

Leisure time does not seem to exist for Pesch, as she is once again about to face an event-packed schedule shuffling between two worlds: the music business and the movie industry.

After laying down vocals in early October in Hamburg, Doro took off to the Swiss mountains to finish working on the sequel to "Anuk - Way Of The Warrior', where she will star as the warrior Meha, who is fighting dark rivaling hordes with her mountain people in 2,500 BD.

The new "Anuk" film will be released in late 2014 and the accompanying soundtrack will include songs from Doro's most recent output, "Raise Your Fist In The Air". Doro states: "For me, the song 'Free Your Heart' fits the film perfectly."

"Raise Your Fist" sold 585 copies in the United States in its first week of release. The CD landed at position No. 65 on the Top New Artist Albums (Heatseekers) chart, which lists the best-selling albums by new and developing artists, defined as those who have never appeared in the Top 100 of The Billboard 200.