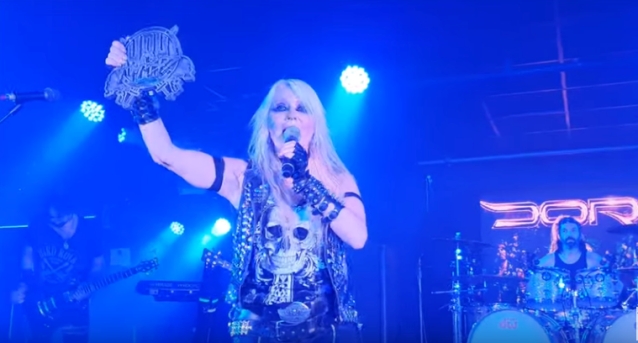 German metal queen Doro Pesch was presented with the "Angel Of Rock" award at the Hard Rock Hell festival in Great Yarmouth, U.K. on Saturday, The winner was decided in a fan vote for the best female rock singer in the world, and an incredible 77.8% of all participants voted for Doro. The award was handed to Doro onstage in front of a cheering audience.

Doro stated: "What a very special honor to receive an award in this country that I've felt so deeply connected with since my beginnings."

Doro was the first frontwoman to sing at the legendary Monsters Of Rock festival in 1996 at Castle Donington. Many of her favorite bands hail from the U.K., some of of which she has toured with, including JUDAS PRIEST, SAXON and MOTÖRHEAD.

You can watch a video of Doro accepting the award below.

The "Angel Of Rock" award is the fifth award Doro has received this decade. She was previously presented with the "Legends Award" at the Metal Hammer Golden Gods Awards in London in 2013; the Metal Hammer "Legend Award" in Berlin in 2013; the "Metal Goddess Legends Award" in Las Vegas in 2016; and the "Hall Of Heavy Metal History" award at Wacken Open Air in Germany.

Doro's successful "Forever Warriors, Forever United" tour will end on November 24, but will continue in March 2020.