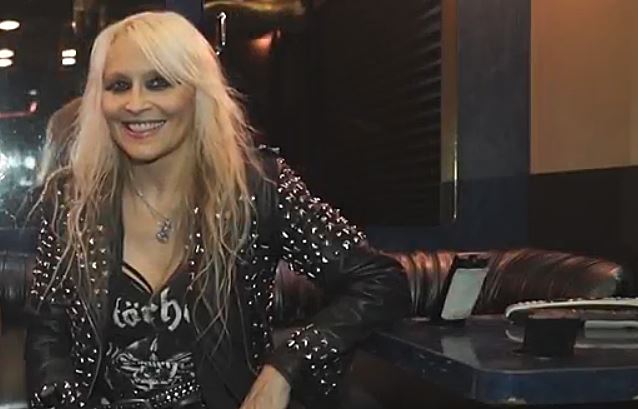 On how she's able to assemble an all-star cast of characters for her many live albums:

Doro: "We are great friends for many, many years. I've toured with so many great bands since I was in WARLOCK. We toured with MOTÖRHEAD many times; everybody is very connected, so I thought we wanted to invite all of these guests who have inspired us. I was inspired by the NWOBHM in the '80s, then someone like Biff [Byford] from SAXON; 'Denim And Leather' is a great song to sing. So is [ACCEPT's] 'Balls To The Wall', 'Princess Of The Dawn', so we invited all of our friends. When you're doing it for such a long time, you know each other really well. They're my closest friends."

On doing a live rendition of "Fear Of The Dark" with ex-IRON MAIDEN singer Blaze Bayley:

Doro: "Blaze is a great friend of ours. I met him when he was in IRON MAIDEN when he replaced Bruce Dickinson for a little while. We got to talk; we went on tour together with an orchestra, and one time we did 'Fear Of The Dark'. It was so nice. It was unbelievable. Then I called him up, 'Should we do it again?' He said, 'Yeah, sure!' We did a couple of full-metal shows, like at Wacken, it was as hot as it could get. Then we did a couple of shows in my former hometown. One was with an orchestra, which is when we did 'Fear Of The Dark'. We did many other songs, one with Udo [Dirkschnieder]. We did a duet, it's called 'Dancing With An Angel'. It was on his album, 'Man And Machine'. We did it with the orchestra with a great arrangement. The song sounded even better in that setting."

Doro: "It was our manager. He was our merchandiser as well. Then we got a little tiny bit of success, he got crazy. Then he left, he split, he left Germany. He went to Turkey. Back then, you couldn't find anybody in Turkey, no Internet, no cell phone. It was pretty bad. He took all of the money, but the worst thing was he took the name WARLOCK. Then we went to court. We lost. I couldn't believe it because there was some stuff going on. It was really bad. Then I thought, 'Okay, let's do one more record.' The record [company] suggested we call it 'Doro' because people could connect it with it. I said, 'Okay.' But then the next record we would call it WARLOCK again, but it never happened. It took me 20 years to get the rights to the name back. I have the rights back, but now it's so much later."

Doro: "It was so mind-blowing. I got two awards. The first one in England, which was very nice and important. As a German band back then, you had to prove yourself in England to get a worldwide record release. It was so important. It meant so much to me in England. Then I got one in Berlin and in Las Vegas. It was so awesome. A great, great lady, Sally Steele is her name. I met her in Las Vegas when we played. She said, 'We are thinking about giving you the award.' I said, 'Oh my God, I can't believe it!' Then I was invited, then I got it. She made a beautiful speech. It was so cool. Everybody was there; the SCORPIONS, Mikkey [Dee] of MOTÖRHEAD, TWISTER SISTER. They were cheering us on. This award means the world to me."

On how she stays young at heart:

Doro: "Live is what we do best. I love people. I love the fans more than anything. It's always a great honor to play in front of people and connect and to touch their souls and hearts and fill them up with good, metal power. It's totally an honor."

On what it was like being one of the first female metal singers to have success in the '80s:

Doro: "I just did what I love. I'm a metalhead. I never really thought it was such a big deal. Yes, I'm a woman, but I'm a metalhead; I think music is above it all. I always had a great time and a great connection to the fans from day one. There were some other cool woman, doing it: ROCK GODDESS from England, I loved the singer, Jody Turner, you had GIRLSCHOOL, Lee Aaron in Canada. There were a handful. It was a little bit lonely sometimes, like on the Monsters Of Rock tour. There were 500 people backstage and I was the only girl. Other than that, I never had any problems. It was always great. I always treated really well."

On her relationship with Ronnie James Dio:

Doro: "I was always a big Ronnie James Dio fan. My dream came true in 1987 for the first time. We were on tour together. The next time was in 2000 in the States. It was a great time because grunge was getting shoved to the side and metal came back. But everybody said, 'You're sure the places will be crowded?' I said 'I'm sure!' It was one of the greatest touring experiences I had. It was DIO, Yngwie Malmsteen and us. We became great friends. In '87, I couldn't speak English that well, but in 2000, I could. I loved him. The same with Lemmy [Kilmister]. That's the reason why I wear my MOTÖRHEAD t-shirt. I love Lemmy so much. We did tours so many times. I met him in 1984 in England. Ever since, we were great friends. We did many things in the studio together. It was my first duet ever on the 'Calling The Wild' album. It was two songs: 'Love Me Forever', and another song Lemmy wrote, which was 'Alone Again'. On our last record, 'Raise Your Fist', we did a duet, 'It Still Hurts'. I always wanted to sing it live, but it never got to that."

Doro released a brand-new package titled "Strong And Proud - 30 Years Of Rock And Metal", on June 24 via Nuclear Blast. It contains three decades of Doro — three unforgettable nights — forever captured on three DVDs and two Blu-rays; including an two-hour-plus great music movie, which delivers deep insights behind the scenes and inside the heart of Doro.