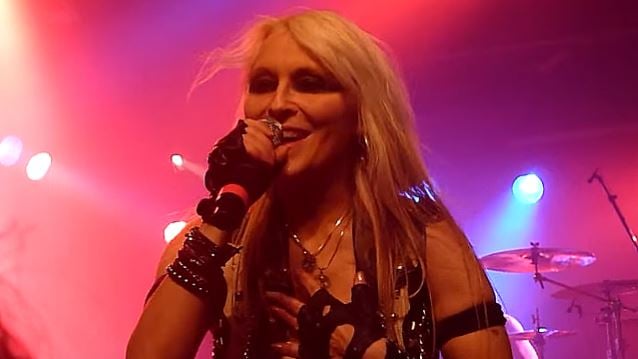 EMP Live TV recently conducted an interview with German metal queen Doro Pesch. You can now watch the chat below.

Asked about the progress of the songwriting sessions for the follow-up to her 2012 album "Raise Your Fist", Doro said: "We are in the middle of songwriting. We recorded a couple of songs already, some really good songs, I think. And one single I wanna put out maybe in two months, and it's called 'Love's Gone To Hell'. We are just about to do a video — like, a beautiful video — and we're just checking it out, how we can do it, because I wanna do something really, really high quality, not cheap stuff. So 'Love's Gone To Hell', that's the first new song. And we have some heavy songs in the making, some really fast songs. I sang it in New York and I just got the mix, and I think it sounds pretty good… The new record, I'm excited about it, but it probably will take another year [to complete]."

Pesch launched a Kickstarter campaign to help produce a high-quality video for "Love's Gone To Hell".

A teaser for the upcoming clip is available below (filmed and edited by Patrick von Schuckmann of www.rock-it-tv.de).